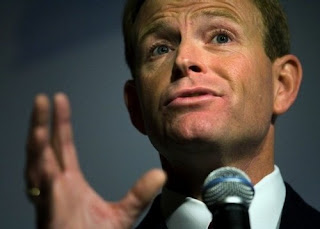 Tony Perkins of the hate group the Family Research Council recently had the temerity to attack the Obama Administration for its participation in the "It Gets Better" campaign. This is the campaign designed to raise the self-esteem of lgbtq youth and raise awareness of the problems they encounter with bullying.

Perkins called it immoral and actually accused the "It Gets Better" campaign of "recruiting" children into homosexuality.

Rather than call Perkins a lying SOB, I think it would be more pertinent to remind folks of just who is immoral in this case by giving 16 very good reasons why Perkins should stop speaking on the so-called immorality of others and ask himself is he truly right with God.

So now I present 16 reasons why the Family Research Council is a hate group. Granted, there are probably more but if I were to list them all, I would be here all day:

August 15, 2011 - GLSEN (the Gay, Lesbian & Straight Education Network) issues a cease-and-desist letter against the Family Research Council demanding that the organization remove video falsely accusing GLSEN of distributing an explicit safe-sex guide to children. FRC subsequently changed the video, tacitly admitting that it was pushing a falsehood against GLSEN.

June 13, 2011 - Two years after claiming to remove "studies" from its website because they contained "outdated material," FRC sneaks the studies back on its website. One of the studies includes citations to the work of Paul Cameron, a highly discredited research.

February 28, 2011 - In order to defend the Defense of Marriage Act (DOMA), FRC distorts research in order to compare gay men to pedophiles.

February 16, 2011 - FRC spokesman Peter Sprigg makes the claim that same-sex households are inferior to two-parent heterosexual households by using studies which have nothing to do with same-sex households. Sprigg, by the way, has earlier voiced opinions that gays should be deported out of the United States:

and that "homosexual behavior" should be criminalized:


September 15,2010 - Perkins and the right-wing LifeSiteNews mischaracterize a study to make a claim that domestic violence happens at a high level in lgbt relationships.

July 6, 2010 - Sprigg pushes a pamphlet, The Top Ten Myths About Homosexuality,which not only repeats discredited anti-lgbt accuracies but exposes a bit of trickery on Sprigg's part. He cites only part of pro-lgbt information which talks about diseases and negative behaviors but omits the information which talks about how homophobia plays a part in these diseases and negative behaviors.

May 20, 2009 - The Family Research Council pushes a fraudulent study, Comparing the Lifestyles of Homosexual Couples to Married Couples. It's a bad study specifically because it uses outdated work and compares married United States couples to unmarried gay couples in casual relationships from other parts of the world.

I think a verse from the Bible would best describe Perkins and the Family Research Council:

Woe to those who call evil good and good evil, who put darkness for light and light for darkness, who put bitter for sweet and sweet for bitter. - Isaiah 5:20

Posted by BlackTsunami at 8:11 AM 9 comments: