The Stunning Hypocrisy Of The AFA’s ‘Thought Police’

Just so we are clear - Kim Burrell calling us "perverted" is perfectly okay and the "homosexual thought police" should "stop trying to destroy her career." Carrie Underwood supporting lgbt equality? Unacceptable! She should shut up! She is not a Christian! How dare she gets invited to sing at a Christian conference. I hope you all know that the religious right will attempt to get away with such rank hypocrisy if no one calls them out on it.


Texas and Virginia join other states competing for the most anti-trans legislation - Just an opening salvo. We knew it was coming. That doesn't mean we are going to lose and it certainly doesn't mean we need to get all chicken#@!%. Bring it on.

'Bathroom bills' are cynical exploitation of parental fears - This morning's post to chew on.

Coachella’s Owner Under Fire For Alleged Ties To Anti-LGBTQ Groups - This is HUGE!
Posted by BlackTsunami at 9:23 AM No comments:

Texas Lt. Governor Dan Patrick held a press conference on Thursday announcing that he will be pushing an an awful anti-transgender bathroom bill which is similar to North Carolina's HB2.

The bill is terrible enough, but what really puts the icing on this bitter cake is the propaganda used by the Family Research Council to defend it:

If Texas thought it had seen the end of the transgender bathroom agenda, they were mistaken! After the overwhelming defeat voters delivered to the Houston mayor and city council for its gender-free, anti-religious liberty ordinance, conservatives are ready for the next chapter: more permanent protections against this dangerous and unpopular crusade of the Left. Like most sane people, Lt. Governor Dan Patrick (R) doesn't think grown men should be sharing fitting rooms, locker rooms, showers, and restrooms with little girls.

To put the brakes on the Left's campaign, Lt. Gov. Patrick has teamed up with State Senator Lois Kolkhorst, in unveiling a statewide bill, the Texas Privacy Act of 2017 (S.B. 6), which would bar public schools, state government agencies, and political subdivisions from throwing open bathroom doors to people of the opposite sex. Sounds reasonable, right? Not to the Left, which is already fueling up its propaganda machine to pump out false information about the measure would and wouldn't do. "I don't know what problem he's proposing to solve," said Chuck Smith of Equality Texas. Why not ask the women and children at Target stores, who have been victims of voyeurs or sexual predators under genderless policies like these? Or the high school girls in Illinois, who are so afraid to undress in the locker room that they wear their gym clothes under their regular ones? The concern is not that transgendered individuals are more likely to be sexual predators, but rather that sexual predators could exploit such laws by posing as transgendered in order to gain access to women and girls.

Although the bill is similar to North Carolina's H.B. 2, this version is exclusively focused on bathroom and shower privacy. It doesn't preempt local entities from taking a position on gender identity in the context of hiring, housing, health care, or public accommodations like the Tar Heels' did. "This is a public safety issue, not a discrimination issue," Patrick said. "It's about common courtesy and privacy, particularly for women." And that's a goal both sides can get behind!


First of all, let's look at the links provided by FRC in answer to Chuck Smith of Equality Texas. Both are questionable. One is from another anti-lgbt site, One News Now (which pushes heavily slanted news courtesy of an anti-lgbt hate group, the American Family Association). It talks about an alleged incident in Texas where a man was caught filming a women in a public restroom. I say alleged because no link to any article talking about the incident was provided.

The second link is from Fox News personality Todd Starnes, a man infamous for creating false stories of anti-Christian persecution. In any legitimate media organization, Starnes wouldn't be able to get a job cleaning bathrooms, much less writing articles about them. Of course it is Fox News which employs Starnes. That speaks for itself.

But what really gets me going in a negative way about FRC's propaganda was a phrase it uses when talking about the issue:

That's not a deliberate concern of FRC. It's a deliberate reliance on fear by conjuring up images of disgusting predators dressed unconvincingly as women being alone with innocent little girls. 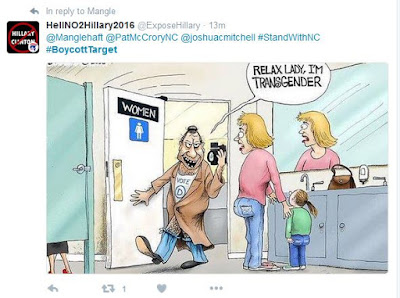 And therein is the problem. You will notice that FRC doesn't say a word about transgender children or transgender men. The organization stooped to the lowest common denominator, the most extreme example in order to exploit parental fear. FRC deliberately plants a seed in the minds of parents. It's  just a little seed, but it is strong enough to blossom into a full spread paranoia. People will gladly act in error when it comes to the safety of their children. Religious right organizations like FRC know this and that is why in almost every issue of lgbt equality, be it marriage equality, lgbt ordinances, and especially transgender equality, they deliberately take the form of Helen Lovejoy from 'The Simpsons' and interject their battle cry "won't someone please think of the children" into the fight.

They do this because facts aren't on their side, especially not in the case of transgender women using public restrooms. The transgender predator image is an ugly creation which has been debunked time after time.

But every time it's debunked, so-called Christians groups like FRC continue to conjure it up. They know they are lying but they don't care.  They just don't care.
Posted by BlackTsunami at 5:04 AM No comments: