The video above is a shocker, but not for the reasons you think.

First, a little background. Drag Queen Story Hour is an innocent event held in libraries across the nation in which fully dressed drag queens read stories to children. One would think that such an event would be ripe for exploitation by the religious right/anti-LGBTQ industry.

But it isn't. Believe it or not, anti-LGBTQ organizations, fake news sites, and personalities have been steadily attacking the event in order to galvanize their supporters with yet another conspiracy theory about the so-called promotion of homosexuality to children. And it's been a failure.  The main reason behind this is the simple fact that Drag Queen Story Hour is a popular event with the children and their parents. In fact, the parents have to give approval for their children to attend. A lot of parents do such and attend the events themselves with their children.

Read more »
Posted by BlackTsunami at 4:43 PM No comments: 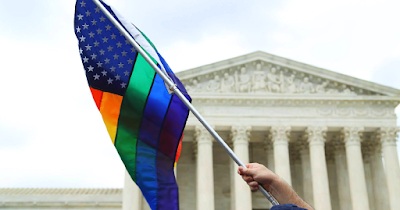 Supreme Court poised to drastically reverse LGBTQ equality - There are six cases in front of SCOTUS. The court has yet to hear any of them but even one loss could devastate the LGBTQ community. Could be. Maybe or maybe not. I was reluctant to post this because some in our community have a tendency of shrieking and pulling their hair out at the slightest bit of opposition or setback while others wag the finger at those of us who feel that we need to be poised to fight. "Don't tone-police," they say. Screw that. This negative future of the LGBTQ community at SCOTUS is a spooky possibility and we need to be ready for it with our fists up and our determination unwavering. SCOTUS is simply one avenue, win or lose. Above all, remember one things - the LGBTQ community always know how to ultimately win the hard way.


A trans asylum seeker was beaten & died of severe dehydration in ICE custody - The nonsense Trump is inflicting on migrants is claiming lives, including those in the LGBTQ community.

LGBTQ Advocates File Wrongful Death Suit On Behalf of ICE Detainee Roxsana Hernandez - And something IS being done about it.

Trump just did 2 major things to set back trans rights nationwide - And Trump is also causing problems for the transgender community in America.

Today, I am a proud son of Harvey Milk and his message of hope for the LGBTQ community - 40 years ago, we lost an LGBTQ hero to an assassin's bullet. But not his heart nor his spirit.


Posted by BlackTsunami at 9:17 AM No comments: