South Carolina Pride was last weekend and it was fun and inspirational. As they always do, the organizers did a wonderful job. It even got a great article in the area newspaper, The State, breaking down how Pride is important for LGBTQ children and families in general:

“Our LGBTQ community is making its own families now. We’ve grown so much and we’ve come such a long way. Marriage equality — we’re all getting married. We’re having kids,” SC Pride President Jeff March said. “So family pride is an important part of our street. We have children in school, and so it’s as much their pride as it is ours.” This year, Famously Hot South Carolina Pride is back in Columbia after a COVID-19 hiatus, and the weekend-long event has something for everyone. Children and families seeking out experiences specifically for them can check out the Family Pride section of the Saturday’s Pride festival, located near intersection of Washington and Main streets in downtown.
. . . “One of the things that I like about the family area of Pride is that not just LGBT families are attracted to coming,” Harriet Hancock Center board secretary Christian Hesch said. “And because of that, you allow them to open the door in an age-appropriate level to their own kids, so if they if they realize one day that maybe they’re part of the community, they know, ‘Oh yeah, I went to family pride with my mom, and I know she’s going to accept me and I can talk to her.’”
In envisioning the Family Pride area, Hesch said she wanted it to be a place where people like herself, a mom of four, could go and enjoy LGBTQ+ Pride without having to have uncomfortable conversations with their kids the next day. “My wife and I have four kids elementary school age, and I want families like ours to see that they’re not alone in the area,” Hesch said. “It’s critical to recognize that we have LGBT folks in the community and South Carolina generally that are of all different family makeups. “We’re not just targeting LGBT youth. We’re also talking about targeting LGBT parents. We’re parents. We have kids. We would like to be able to go celebrate our Pride in our family unit with our kids. ... This is about celebrating pride in an entire community, and family is just one aspect and one segment of that community.”

It's about time an article about Pride focused on what it does for our kids and families. Generally we are portrayed as outsiders attempting to barge into the American idea of family.  In contrast, this article brings forth a simply truth - we are not outsiders. We are a part of the American idea of family.
However, there is also bad with good as seen by this tweet criticizing SC Pride: 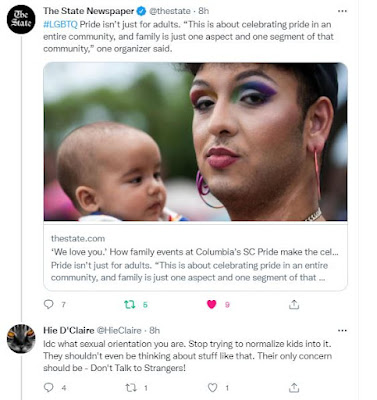 The tweeter is reacting to the picture (which was chosen to run with the article) by citing an unfortunately common stereotype imposed on LGBTQ people. And that stereotype is any visibility about us, any talk about us, anything about us at all has to do with sexual intercourse and how children need to be guarded from all things about us because we would 'normalize' homosexuality (particularly sex) to them.
It's a bunch of bull.
Now there was a time in which I would have of course totally disagreed with the statement but with the proviso that the picture above wasn't the best choice to be run. Well chalk it up to  the weariness of getting older and simply not giving a 'f@k' but I don't think there is anything wrong with the picture. I love it. It's an adorable thing to me on so many levels. And it pinpoints the idiocy that comes with fearing LGBTQ people.
All I see is an LGBTQ man in make-up holding a baby (they are both identified in the picture above the article in the link) who is obviously curious about what he's seeing. But most babies are like that. That's all. It's simple and basic. Some folks will conjure up nonsense about 'grooming,' 'sexualizing children,' 'normalizing homosexuality' and a bunch of other ridiculous words and phrases designed to make their silly fear sound like concern. But it would appear to me that our concern shouldn't be with the LGBTQ man holding the baby, but with the minds of folks who see something dastardly about it.  Because frankly, I can't make any connection of the infant being exposed to any danger. And I don't think that anyone thinking logically could either.
But I do get how the picture is scary to some people just like the article following it is scary. They both represent LGBTQ people as being happy and free, unencumbered by the stereotypes and lies some try to anchor to our heels, and especially not in a prostate frame of mind begging for 'tolerance.'
You don't beg for tolerance so that you can live in your own house. You simply live. And it's high time that LGBTQ folks begin that asserting that because America is our house, too.
BTW, folks did pushback on our friend in the above tweet (including yours truly. Twice): 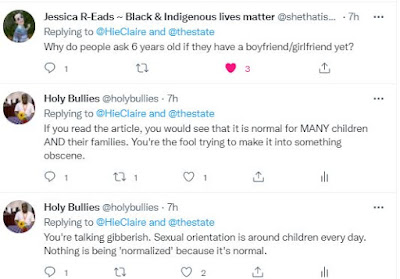 Posted by BlackTsunami at 5:13 PM No comments: