I had a very nice twitter conversation today with Kellie Fiedorek of the Alliance Defending Freedom regarding the recent law passed in Oklahoma which allow adoption agencies to receive taxpayer funding while discriminating against the LGBTQ community.

For those who don't know, the Alliance Defending Freedom has been called a hate group by the Southern Poverty Law Center due to its diligent attention to undermining LGBTQ rights on many levels. From writing anti-transgender student bills to defending discrimination against the LGBTQ community to helping efforts to put gays in jail simply for their sexual orientation in countries like Belize and Jamaica, ADF is a one-stop shop for attempts to put bigotry and homophobia into laws.

And (surprise, surprise) ADF also has a hand in crafting bills like the one just passed in Oklahoma.

Of course ADF doesn't actually come out of the box screaming about the "homosexual agenda" like other folks we know, such as Peter LaBarbera or Linda Harvey. Instead, ADF is very passive-aggressive, sort of like a racist organization which says that "it's not anti-black, just pro-white."

The sad thing is, as you will read in photocopied Twitter thread below, ADF employees come across nice. So nice in fact that you almost forget what the organization is actually about  (Editor's note - please pardon the spelling errors and the typos on my part) : 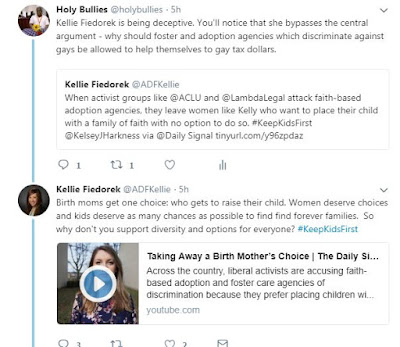 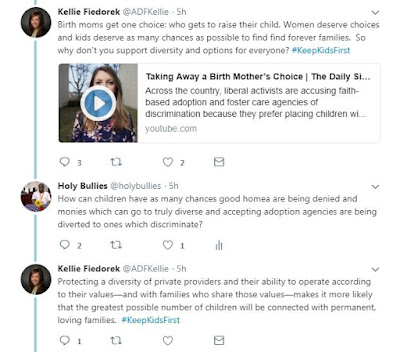 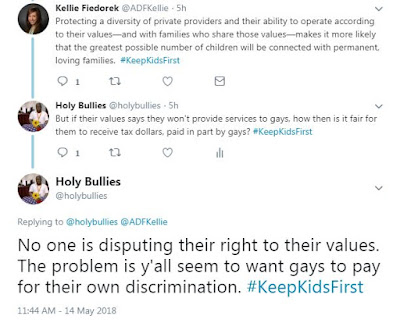 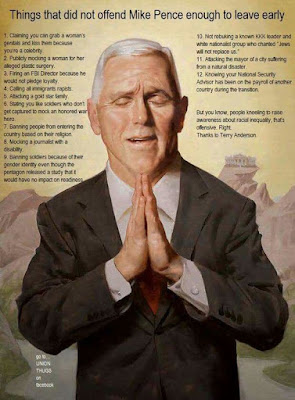 Mike Pence addresses one of the most LGBTQ-unfriendly colleges in the country - And that's not the most shocking thing about the situation. Check out the news brief below.

WATCH: Mike Pence says more Americans believe in God now because Donald Trump is president - This right here is the most shocking. And he is probably right if he is talking about the number of Americans who have sank to their knees crying "Oh God! Why is this fool in charge!"

Anti-gay adoption bills mask messages of old bigotry with false appeals to religious freedom - My post from earlier this morning because if you haven't read it yet, you really should.

LGBTQ Groups Call New Oklahoma Adoption Law Discriminatory - THIS is what I'm talking about in the above news brief.


Posted by BlackTsunami at 9:12 AM No comments:

When we attempt to take advantage of our fairly won marriage victory by going through the  rituals and routines it encompasses, that same religious horde conjures up the argument that innocent inquiries into wedding shops and bakeries or desires to simply start a family via foster care or adoption are actually strategic plots to undermine and destroy Christianity. And that people and industries whose so-called religious beliefs would never be "protected" if they were exploited to deny service because of race, religion, or gender suddenly need a blanket of protection against the gay community because we are acting as if we are normal Americans.


Don't be fooled by the lies folks say regarding the law in Oklahoma, the soon-to-become law in Kansas, and several other similar laws which allow adoption and foster care agencies to discriminate against gays while receiving tax dollars.

The proponents of these contraptions masquerading as bills and laws will  claim that agencies doing a service shouldn't have to betray their "core beliefs." Then they will tell you exaggerated anecdotes and spin awful tales of how supposedly gays are targeting Christians for financial ruin and how that these laws are the only thing standing between having successful businesses and people losing their homes, livelihood, etc.

Their spin is so good that you tend to forget that behind it is a syndicate of religious zealots and organizations with lots of money, lots of media savvy, a lot of connections to government, and a self-righteous mindset which makes them immune to any type of self-examination that doesn't end with God coming down from Heaven and anointing them with crowns while  a host of angels sing their praises.

Let me speak for other side of the issue, i.e. the men, women, children, and families who are and will be damaged by these laws. No one is paying attention to us. No one seems to care about our core beliefs or our livelihoods while preening, precisely coiffed men and women ooze fake sincerity as they repeat rehearsed talking points about "religion being this nation's cornerstone," etc. etc.

Read more »
Posted by BlackTsunami at 4:36 AM No comments: