You DO NOT speak for African-Americans, Mike Huckabee


Furthermore, how dare you appoint yourself the person who decides what is or isn't discrimination. How dare you conjure images of the nightmarish past of segregation,  water hoses, and racial beatings as sort of a whip to beat lgbts in some type of psychological mindset that it's not "real discrimination" when our families are devalued or our lives are reduced to caricatures.

Who gave you the right to disrespect the spirit of the African-American civil rights movement by using it as a tool to justify discrimination another group? How dare you besmirch the memories of all the nameless, faceless lgbts of color who had to deal with the double stigmatization of racism and homophobia.

I think I speak for a great majority of lgbts of color when I say don't you dare take it upon yourself to be so presumptuous about black people and especially us. We are not specimens on a lab table. You can't dissect, detach, or eliminate the "gay" from me nor any other lgbts of color so don't pretend as if we don't exist.

I am proudly black and gay, but one thing I am not is stupid. I know your type. You care about neither the black or gay communities. Based on your past history, you despise the lgbt community and you only care about the black community when you can use them for your own purposes.

Seriously, where are you on black issues? Don't think black people forgot your non-answer regarding the Confederate flag. On that same note, what is your record on other issues regarding the African-American community?

Don't use the black community and the gay community as pieces on a chess board. That IS offensive. And in the future, educate yourself about the common history of being black and gay in America.

But really the next time you feel the need to speak FOR black people, don't. Please don't. We have enough folks speaking out of their asses in an attempt to talk on our behalf.

Posted by BlackTsunami at 3:08 PM 5 comments: 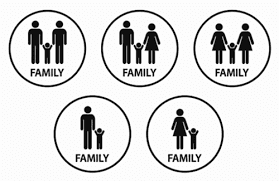 Regrets Linger 30 Years After Gay Couple Had Their Foster Children Taken Away - Wonderful story (in spite of the title) about gays being foster parents and adopting children 30 years ago. It shows that people can change their ignorant behavior. And I have to commend one of the former antagonists in this situation. He could have easily said his feels about gays adopting and fostering children was once his "deeply held beliefs." Instead, however, he calls it for what it was - bigotry.

Pat Buchanan doubles down on 1983 column claiming AIDS is nature's punishment - So Pat Buchanan isn't happy that gays can now marry. The "bitch" in me is very happy that he lived to see this day because, as this post notes, a column he wrote about gays during the beginning of the AIDS crisis is still cited today by the lgbt community as an example of how nasty and callous people were to us back. It's not pretty.

Pastor Who Said He'd Set Himself On Fire Over Same-Sex Marriage Now Saying He Loves The Gays - I know what you are going to say - "if he really loved us, he would kept his word."

6 Truths About LGBT Lives That 4 Members Of The Supreme Court Won’t Accept - And unfortunately, they probably never will.

After Marriage: How To Ask Smart LGBT Questions In 2016 - Is there any way we can drill this into the media's head?

Tom DeLay Knows Of Secret DOJ Memo To Legalize '12 New Perversions,' Including Bestiality And Pedophilia - Tom DeLay is full of @!%^. End of story.
Posted by BlackTsunami at 9:10 AM 1 comment: