So what do some of these self-appointed saints think about Trump? Bear in mind that this man has attacked a gold star family, claimed that President Obama and Hillary Clinton helped found ISIS, and asked Russia to hack into Clinton's emails.

However, the American Family Association's fake news site, One News Now, just ran an article today kissing up to Trump so hard one would think that group was auditioning to be Trump's fourth wife. Here is a little snippet which will probably make you laugh:


In a 35-minute speech at a "Pastors and Pews" event in Orlando, Trump noted that evangelicals have been silenced by threats from the IRS to take away their churches' tax exempt status – something he said he'd change.

. . . Pastor Bryan Schwartz attended the event and says he was impressed by Trump's poise. "His demeanor was calm. It was collected," the pastor says. "And what he was sharing was important to the faith community, really trying to encourage them to have the courage to lead in our community, in our congregations, and not be silenced."

Schwartz says he also embraced Trump's message of political involvement from the pulpit.

We've seen Trump and heard his speeches. The vast majority of us who oppose the idea of him as president do so because he doesn't have calm demeanor or poise. He can't concentrate on a single issue and is too concerned with settling grudges and throwing out outrageous snippets that he can't focus on simple policy.

He is, at the least, a more woefully inadequate presidential candidate than that Martin Sheen character in The Dead Zone movie, i.e. the one who would have blown up the planet.
This ass-kissing article says more about groups like AFA and pastors like Schwartz who support Trump than  it reveals anything noteworthy about Trump. Their lies about Trump's so-called calm demeanor isn't fooling anyone. They only want Trump, not because they feel he is the moral one to support, but because he has guaranteed that they will attain more power should he become president.   And they are willing to overlook all the times when Trump has acted, shall we say, less than morally fit.

There is nothing Christian or moral about their idea of "pragmatism." What would Jesus do, indeed? 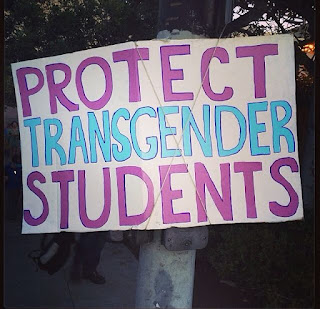 WATCH: Omaha schools meeting goes off rails as angry parents blame trans kids for destroying America - Fear and ignorance are the parents to the bastard children of hate and prejudice. It depresses me how folks will not educate themselves about our transgender kids. It puts me in the mind of a depressing video I saw last night in which someone said "this whole thing started with Caitlyn Jenner." Uh, no it didn't.

Passions flare as OPS board considers policies regarding transgender students - The good news from the above item is that the school district is standing firm in the commitment of protecting transgender children.

Theodore Shoebat Longs For Days When Marco Rubio Would Be Hung From The Gallows - Leave it to that nasty Shoebat boy to make me feel a bit sorry for Rubio. And I despise Rubio.

12 Adorable Photos from Gay Uncles Day - If you don't think that this is adorable, you have no soul. Seriously.
Posted by BlackTsunami at 9:07 AM 1 comment: