'TERFs, right-wing media had a disgusting 'partnership' in 2019' & other Thur midday news briefs


TERFs claimed they were being censored, but they found a safe space in right-wing media in 2019 - Any of my lesbian sisters who was involved in this madness, you need to wise up. Don't think for an instant that your "new allies" aren't going to plot to put your rights and safety into a grave next to the one you are helping them dig for our trans brothers and sisters. Knowing them, they are probably making measurements even now as they smile in your faces and direct your hands to jab the knives into the backs of your own people.

2019’s worst anti-LGBTQ meltdowns - And there was a lot. I should sue for battle pay when I covered that stuff.

Here are New Year resolutions that all LGBTQ people can share - If I told you my resolution (s), people would get so shocked that they would put that wall back up in Germany.

Here Are 20 LGBTQ Celebrity Coming-Out Stories That Moved Us In 2019 - Celebrity or not, people coming out is a good thing. And it will always matter. Particularly with our LGBTQ children. There is nothing wrong with someone publicly showing them to not be afraid to live their lives honestly.
Posted by BlackTsunami at 7:02 PM No comments:

Whether or not Trump is re-elected in 2020, the one thing the LGBTQ community simply has to do is demand more attention to how his Administration is undermining our equality and safety. Remember this 2016 tweet of his when he was running for president: 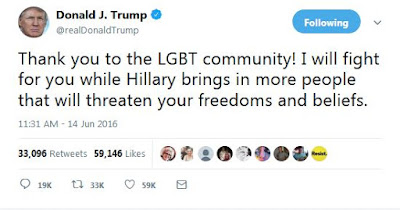 We now see that the above tweet is one of his biggest lies. Since taking office, his administration has been systematically eliminating any mention of our community from executive guidelines on discrimination

With just over a year left in President Donald Trump's first term, another late-breaking news item barely made waves: The Interior Department — which manages the majority of the federal government's public lands — deleted "sexual orientation" from its anti-discrimination guidelines, as HuffPost first reported last week. The removal was just the latest in a nearly three-year-long effort to strip mention of LGBTQ people from the executive branch bureaucracy.

Reports of such changes began the day Trump assumed office, when LGBTQ content was deleted from the White House, State Department and Labor Department websites within "minutes" of his having been sworn into office, according to GLAAD, a national LGBTQ advocacy group.

Since then, drip by drip, other parts of the federal government have had their online content trimmed to omit mention of lesbian, gay, bisexual, transgender and queer people.

. . . Indeed, the government's own civil rights watchdog group, the Commission on Civil Rights, in November found a systematic approach to dismantling LGBTQ rights protections. Karen Narasaki, a member of the commission's board, called it "truly unprecedented."


While the removal of these guidelines has been given less attention than they should have been, they underscore a reality too bothersome to ignore.  This isn't simply a matter of Trump making a promise and then not taking any action.  It's a matter of him taking the opposite action of the promise he made.

The group GLAAD (Gay & Lesbian Alliance Against Defamation) has pointed to 133 negative activities committed against the LGBTQ community by the Trump Administration.

From banning transgender men and women from serving in the military to appointing anti-LGBTQ leaders (some who have falsely linked gay men to pedophilia) to supporting anti-LGBTQ discrimination by religious entities while giving them access to gay tax dollars, Trump has freely run roughshod without the media even asking once about what he's doing.

What Trump has been doing to the LGBTQ community is the equivalent of promising someone that you will help him cross the street  but then push him in the middle of busy rush hour traffic. His attacks on the LGBTQ community may not be as high-profile or obviously prejudiced as his attacks on immigrants and undocumented people, but they are equally egregious.

Posted by BlackTsunami at 6:10 PM No comments: