Earlier this week when it was announced that Trump would be keeping Obama's executive order protecting lgbt federal workers, I noticed that there was a somewhat mute if not silent reaction from members of the religious right.

I think it's safe to assume that the following is the reason why.

Investigative journalist Sarah Posner just got her hands on a leaked draft of a "religious freedom" executive order. To put it nicely, the draft is a monstrous piece of work.

From her article in The Nation:

A leaked copy of a draft executive order titled “Establishing a Government-Wide Initiative to Respect Religious Freedom,” obtained by The Investigative Fund and The Nation, reveals sweeping plans by the Trump administration to legalize discrimination.

The four-page draft order, a copy of which is currently circulating among federal staff and advocacy organizations, construes religious organizations so broadly that it covers “any organization, including closely held for-profit corporations,” and protects “religious freedom” in every walk of life: “when providing social services, education, or healthcare; earning a living, seeking a job, or employing others; receiving government grants or contracts; or otherwise participating in the marketplace, the public square, or interfacing with Federal, State or local governments.”

The draft order seeks to create wholesale exemptions for people and organizations who claim religious or moral objections to same-sex marriage, premarital sex, abortion, and trans identity, and it seeks to curtail women’s access to contraception and abortion through the Affordable Care Act. The White House did not respond to requests for comment, but when asked Monday about whether a religious freedom executive order was in the works, White House spokesman Sean Spicer told reporters, “I’m not getting ahead of the executive orders that we may or may not issue. There is a lot of executive orders, a lot of things that the president has talked about and will continue to fulfill, but we have nothing on that front now.”

. . .  The breadth of the draft order, which legal experts described as “sweeping” and “staggering,” may exceed the authority of the executive branch if enacted. It also, by extending some of its protections to one particular set of religious beliefs, would risk violating the Establishment Clause of the First Amendment to the Constitution.


Ira Lupu, a professor emeritus at the George Washington University Law School, is quoted in Posner's article. He  goes into detail as to how it may violate the Establishment Clause::

In particular, said Lupu, the draft order “privileges” a certain set of beliefs about sexual orientation and gender identity—beliefs identified most closely with conservative Catholics and evangelical Christians—over others. . . . Lupu added that the language of the draft “might invite federal employees,” for example, at the Social Security Administration or Veterans Administration, “to refuse on religious grounds to process applications or respond to questions from those whose benefits depend on same sex marriages.” If other employees do not “fill the gap,” he said, it could “lead to a situation where marriage equality was being de facto undermined by federal employees, especially in religiously conservative communities,” contrary to Supreme Court rulings.


I haven't even talked about what it says about gays and the adopting of children. I suggest that folks read the article in its entirety.

I would also like to point out that this possible executive order  seems to be part of a larger desire of religious right and evangelical groups to take a more aggressive attempt to seize power in the political arena.

Earlier today, the Family Research Council sent out a Washington Update bragging about a press conference it held with various religious and Congressional leaders to introduce what the organization calls The Free Speech Fairness Act, H.B. 781. This act would overturn The Johnson Amendment, which forbids tax-exempt organizations (i.e churches) from openly endorsing and opposing political candidates.

Pastors have for too long been intimidated into silence. As I told the press today, Dr. Martin Luther King -- the greatest "political pastor" in the nation -- spoke forcefully from the pulpit about how the issues of the day were to be driven by pastors and the people in pews. For the whole of American history, churches have been at the forefront of shaping debate and public policy. That's where they ought to stay.


So now not only is there a possibility of an executive order which could enshrine all sorts of discrimination into law, but there is also a push to allow churches to endorse or oppose political candidates without losing their tax-exempt statuses.

So one side of the spectrum with Trump in the White House is Steve Bannon and his bunch pushing xenophobic discrimination (i.e. the Muslim ban) disguised as an act protecting Americans from terrorists. And now on the other is a push to enshrine a Christian evangelical theocracy disguised as a push for liberty and free speech.

Posted by BlackTsunami at 5:51 PM No comments:


LGBT Activist Groups Up in Arms Over Gorsuch SCOTUS Nom - One thing hardly anyone is mentioning about Trump's SCOTUS nominee is that Trump didn't necessarily pick him. He came to Trump as a pick from the right-wing, racist Voter ID law pushing, anti-lgbt Heritage Foundation.

The Religious Right Is Thrilled About Neil Gorsuch - Naturally the religious right is extremely happy over this. While I'm still mad about how the GOP treated Obama SCOTUS pick Merrick Garland, I will console myself with the fact that should Gorsuch is appointed, his possible vote will only count as Scalia's vote. He doesn't sway the court in another direction. Now the next SCOTUS pick . . .

Texas Mayor Jess Herbst Comes Out As Transgender - Good for you!!

Can You Name These Lesbian Film From Just One Line? - A little levity in the midst of the storm is always a good thing.

Britain posthumously pardons thousands of gay men in 'Turing law' - I GUESS this is a good thing but the situation should have never come to this in the beginning. So many lives needlessly destroyed.
Posted by BlackTsunami at 9:18 AM No comments:


The fact that there are some folks who are attacking Wisconsin senator Tammy Baldwin for her sexual orientation (Baldwin is the first lgbt ever to be elected to the United States Senate) is abominable. The fact that that they are trying to recruit blowhard Milwaukee sheriff and Fox News jackal David Clarke to run against her (particularly when he has a bad reputation in performing his duties, i.e. four people dying in his jail including an infant) is just downright ridiculous: 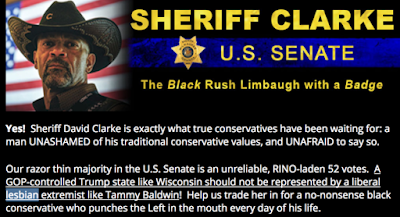 The Huffington Post has the entire story.
Posted by BlackTsunami at 5:00 AM No comments: