No doubt this is sure to get the anti-LGBTQ right and their supporters whining about being persecuted, but to hell with them. Full speed ahead.

My only concern is that there is someone out there to push the narrative of what this is truly about.

The National LGBT Bar Association announces a new campaign that asks attorneys across the nation to COMMIT to INCLUSION by repudiating anti-LGBT legal groups like Alliance Defending Freedom (ADF) and Liberty Counsel and pledging never to support them through pro bono services.

“For more than 25 years, groups like Alliance Defending Freedom and Liberty Counsel have overseen an army of litigators and waged a systematic, insidious, and well-funded crusade to strip protections from LGBT people,” said LGBT Bar Association Executive Director D’Arcy Kemnitz. “With the recent Supreme Court decision in the Masterpiece Cakeshop case, the announced retirement of Justice Anthony Kennedy, and more and more court victories for those seeking a license to discriminate, fair-minded attorneys committed to diversity must push back. If we don’t take these threats seriously and act accordingly, we could face long term legal setbacks for LGBT people.”

The COMMIT to INCLUSION campaign includes a fact sheet detailing the history of these anti-LGBT legal groups, their enormous budgets, and a sample list of cases in which they have sought to harm LGBT people. It also includes a one-minute video featuring: National LGBT Bar Executive Director, D’Arcy Kemnitz; Chief Counsel, Freedom for All Americans Education Fund, Jon Davidson; and Cathy Sakimura, Family Law Director at the National Center for Lesbian Rights.

The COMMIT to INCLUSION pledge reads in part: “We commit to inclusion by ensuring that our personal pro bono and volunteer capacity and personal financial resources will not be used to support the work of ADF and Liberty Counsel.”

COMMIT to INCLUSION runs from July 24 through September 27.

Posted by BlackTsunami at 4:49 PM No comments: 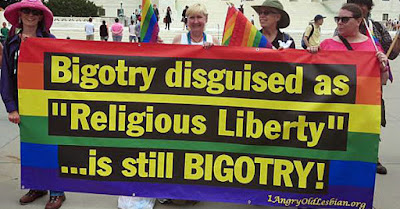 Same-sex couples are being refused service by wedding vendors - Since the Masterpiece ruling, which shouldn't even be allowing this mess, some folks have been going buck wild. And not just with regards to gay weddings:

NAACP hosts ‘historic’ LGBT Town Hall - This was last week and I apologize for missing it. This event should have had more coverage.

Teenager 'heartbroken' after school banned his talent show drag act - Drag is about performance. It was and to an extent still is a way for the LGBT community to take on the personalities of folks or entities they admire for their boldness and project that quality into their own lives. Too many people think it's about making fun or being sexually graphic. It's about skill, discipline, and self-empowerment.

Gay guys from around the globe talk sex and personal safety in Amsterdam - Very very necessary.

Delaware Just Banned Gay Conversion Therapy For LGBTQ Youth - Go Delaware! It's your birthday . . .!
Posted by BlackTsunami at 9:09 AM No comments: