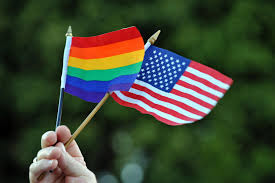 More high school students than ever are coming out, but their despair remains acute - As more children are coming out, they are being met with the reality of a homophobic world. That's one of the main reasons why we cannot sit back and despair when things happens to our community. Those children are watching us and when they see us raising hell over homophobia and refuse to be disrespected, they get empowered. Remember that whenever you feel complacent. It's not just about you.

Virginia Democrats walk out as GOP-invited pastor denigrates gay people on House floor - Virginia Republicans are still bitter over their election loss, so they invited this bozo to do a prayer on the House floor.

12 New Jersey schools roll out LGBTQ curriculum pilot program - Good for them!
Posted by BlackTsunami at 3:47 PM No comments:

It bothers me tremendously when people generalize about the African-American community when it comes homophobia and such. Forget the lazy idea expressed by some folks that black people are more homophobic than other groups because it's simply not true. That's not to say that homophobia doesn't exist in the black community. There is nuances and intricacies. But one thing is clear -  family is always important.


With everything else going on in the world, it feels nothing short of amazing to watch Dwyane Wade, noted NBA star, talk about how he and his wife Gabrielle Union are not only supporting but also empowering their teenaged child Zaya.

In December, Wade did an interview where he referred to the 12-year-old with she/her pronouns. Now, Wade has revealed that one day the child came home and sat Wade and Union down and asked not only to be referred to with those pronouns, but to also be called Zaya, as she comes into her identity.


With all of the lies propagated against trans children by the anti-LGBTQ industry, it's awesome to see a public figure telling his family's personal experience and steamrolling over all of the fear tactics and distortions.