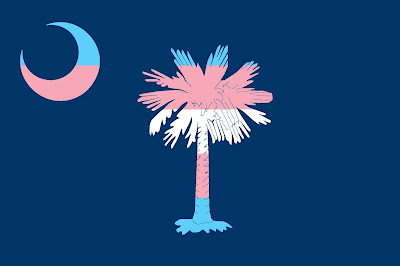 On Thursday morning, South Carolina state Senators held a committee meeting to discuss a bill which would ban trans girls from playing in high school and middle school sports. A bill similar to this had already been killed five times - two being in the state House of Representatives.

But lawmakers did not take a vote because there were so many people signed up to speak about the bill. According to The State:

A panel of senators on the Education Committee heard about two hours of testimony on the bill Thursday before deciding to come back in the summer to take up the issue again. Lawmakers did not take a vote on the bill, sponsored by Sen. Richard Cash, R-Anderson.

I should mention the proponents of the bill and what they said, but why bother. You know who they are - legislators supporting the bill and a person from the local "traditional values for moral integrity blah blah blah" group who repeat the same lying talking points about the so-called unfairness to cis female athletes (without any proof, mind you.)
The real story are those who came out against the bill. These folks did not come to play Here are just a few of those who spoke:
Read more »
Posted by BlackTsunami at 5:03 PM No comments:

Country Duo Graciously Responds To Republican Who Blocked Honor For Gay Singer - I support how they are handling this.
Florida Republican gets slammed by her own daughter: Kids' lives are at stake - Oop!
‘Queer Love in Color’: Photo book celebrates diverse LGBTQ relationships - Sweet!
State Department expresses concern over anti-LGBTQ bill in Uganda - Uganda is messing with again, y'all.
Posted by BlackTsunami at 9:16 AM No comments: