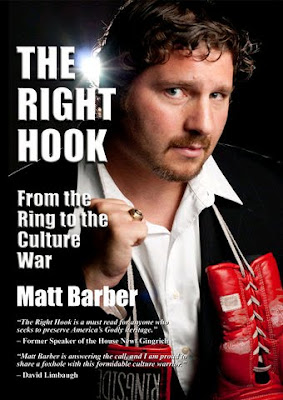 No doubt it will repeat his distorted tale of being fired from AllState because he wrote an anti-gay column (which utilized the discredited work of Paul Cameron) "on his own time."

The tale is a distortion because Barber used company equipment to write the columnn and he also identified himself as an employee of AllState; two facts that always seem to be excluded from the religious right telling of the story.

This book leaves me conflicted for two reasons:

1. I don't want to wish any ill will on anyone, especially someone who is working hard on a book. Having had to self-publish one myself, I know how difficult it is to do such. Barber didn't have to work as hard as I did because he worked his connections. And I admire that just a little. Barber parlayed his AllState factoid into a cushy position at Concerned Women for America, the Liberty Counsel, and now a book with mentions by Newt Gingrich and Mike Huckabee.

You have to admire his chutzpah; that is if you ignore his basic disregard for truth.

2. Far be it from me to make comments on someone's personal appearance, but I have to say it. Barber looks like a Las Vegas lounge singer.

Oh come on. Can't you just picture him in a sleazy dive somewhere off of the Vegas strip singing some off-key version of a Frank Sinatra song with a phony Italian accent in front of a bevy of half naked female dancers where he will be followed by an awful comedian whose top pops off in the middle of her routine?

This is the guy who is fighting a culture war for the preservation of so-called American values? A guy who looks like a rejected character from Showgirls?

Seriously though, I'm sure the book will get lots of attention. And this isn't a good thing because Barber doesn't bring anything new to the table. He is yet another phony religious right expert who will exploit the Christian beliefs for his own purposes via peddling the same old lies.

Case in point, a recent One News Now article which inaccurately claims that he debunked a recent study which proved that children in lgbt households suffer no adverse effects:

Matt Barber of Liberty Counsel tells OneNewsNow that the conclusions are totally false. He points to another massive study conducted by homosexual researchers at the University of California.

"The preponderance of studies shows that girls raised by lesbian so-called 'parents' are more sexually adventurous or less chaste. They're more likely to experiment and try lesbianism to self-identify as lesbians," Barber notes. "[And] boys raised by homosexual men have a fluid concept of gender roles and are more likely to engage in the homosexual lifestyle."

How in the world does Barber conclude that the pro-lgbt parenting study is false? Not only does he not give proof of this but he also doesn't give the name of the study which he says refutes it.

I emailed Barber asking which study he was referring to and of course I didn't receive an answer.

But after a little research, I discovered which study he was referring to; a 2001 study conducted by researchers Judith Stacey and Timothy Biblarz.

And I think the reason why Barber didn't give any information regarding the study is because the way he distorted it has been debunked on numerous occasions by Stacey herself, as this link will show.

And as far as his other claims regarding "domestic violence" and a "short lifespan," those are lies peddled by the religious right for the past 30 years and have been easily refuted by so many others, me included.

But why in the heck should Barber care about truth? He has a book deal and more prominence.

That's all that matters, right?

Dissecting a One News Now article

Posted by BlackTsunami at 5:41 AM 5 comments: Links to this post