As Florida's 'Don't Say Gay' bill nears passage (and it probably will pass), the Disney Corporation is in trouble. And for good reason.

As Florida’s “Don’t Say Gay” bill — which would ban discussion of LGBTQ+ topics in primary grades — rapidly moves closer to becoming a reality, Disney has come under increasing scrutiny for its history of donating to the politicians behind the bill and its apparent intention to continue doing so.
Under the mounting pressure, Disney CEO Bob Chapek affirmed to employees today that the company “unequivocally” stands with its LGBTQ+ workers and says that there’s more the company needs to do in that regard. At the same time, Chapek made his case for why the company isn’t speaking out more in a memo sent to Disney staff.
“On Friday, I met with a small group of Disney LGBTQ+ leaders to discuss controversial legislation pending in Florida that would impact their communities,” Chapek wrote. “I want to be crystal clear: I and the entire leadership team unequivocally stand in support of our LGBTQ+ employees, their families, and their communities. And, we are committed to creating a more inclusive company — and world. I understand that the very need to reiterate that commitment means we still have more work to do.”
Chapek went on to explain that the reason Disney hasn’t made a public statement is that he feels they do “very little to change outcomes or minds. Instead, they are often weaponized by one side or the other to further divide and inflame. Simply put, they can be counterproductive and undermine more effective ways to achieve change.”
While Chapek addressed previous donations in the memo, he made no specific promises as to how this aspect of Disney’s operation might change in the future, only that they are being reassessed. “Geoff Morrell, our new Chief Corporate Affairs Officer, will be reassessing our advocacy strategies around the world — including political giving — as he begins to integrate the communications, public policy, government relations, and CSR teams,” Chapek wrote.

I know what you're probably thinking and I agree. Those are nothing but weasel words from a company who has a very high LGBTQ clientele. And as many times as I and others in the community have defended Disney from the attacks by the religious right, it's not wrong for us to cry out that the company is betraying us when it supports politicians who want to erase us.
This beef with Disney isn't over by a long shot.  And that's a good thing in general. The bill may pass but it has awakened our community. Granted, I wish our community had been as awake when folks began passing those anti-trans bills, but I won't dwell on that. At least not now.
The important thing is that we are now aware of the attack on all LGBTQ people. A 'Don't Say Gay' bill in Florida, a directive attempting to put the affirming parents of trans youth in jail for child abuse - all of it is connected.
This is a war on LGBTQ people and it's time that we recognize. And act accordingly.
Posted by BlackTsunami at 5:08 PM No comments: 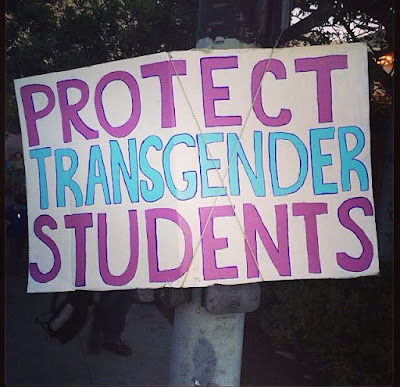 Idaho bill would make it a felony to give minors transition-related care​ - And the war continues. Keep it up, y'all. It will crash down on your heads.
Brittney Griner has reportedly been detained in Russia for weeks - This is NOT good.
LGBTQ refugees fleeing Ukraine face discrimination in countries with anti-gay laws - Well this is depressing.
March's most entertaining and binge-worthy queer movies and shows - Might as well take our minds off of the nonsense of real life every now and then.
Posted by BlackTsunami at 9:13 AM No comments: