While Rand Paul backtracks from his bigoted boo-boo, anti-gay hate group tries to defend him


When President Obama won a landslide re-election in 2012, some commentators were quick to jeer at right-wing outrage. Until the time his victory was announced, various folks on the right, including Fox News pundits and people like Karl Rove, were sure that his opponent, Mitt Romney would be the one to have the landslide. They firmly believed this in spite of the fact that polling clearly showed that Obama would win.

The commentators jeering at conservatives blamed a "right-wing bubble" for their embarrassing depart from reality.  A "right-wing bubble" is when conservatives create their own reality because their own stubbornness will not allow them to see the truth. If Rush Limbaugh tells them that they are in the middle of a blizzard even though it's 100 degrees outside, they will bend over backwards, including deliberately lie to themselves, instead doing the right thing and declaring that Limbaugh is full of shit.

It would seem that this bubble includes anti-gay groups. Take the recent controversy with presidential candidate, Sen. Rand Paul for example

On Wednesday, Paul made an absolutely stupid statement regarding lgbt equality.During a talk with Iowa college students, he said the following about gays being fired for their sexual orientation:

"I think, really, the things you do in your house, just leave those in your house and they wouldn't have to be a part of the workplace, to tell you the truth,  . . .I think society is rapidly changing and that if you are gay, there are plenty of places that will hire you."


It was an infuriating statement which implied that being an lgbt is all about sexual intercourse and facts such as gays leading families, raising children, and caring for loved ones don't exist.

Fox News has some serious #SpiritDay hypocrisy to work out

The webpage Media Matters noted that some Fox News personalities have been supporting our lgbt youth  from bullying during Spirit Day by wearing purple.

Media Matters also noted that the news channel pushes homophobic smears about LGBT History Month. I guess the point of the following video is don't pretend as if you support lgbt youth for one day out of the year when the way you cover LGBT History Month contributes to the problems they are facing:

Posted by BlackTsunami at 2:49 PM No comments: 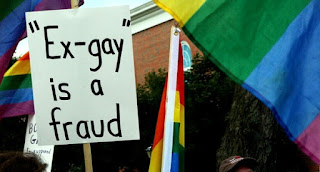 Texas Experts Debunk The Transgender "Bathroom Predator" Myth Ahead Of HERO Referendum - Good. And again. These days, you have to scream the truth a couple of times to get any attention.

Top Psychiatrist Calls For “Radical Solutions” To Address Mental Illness In LGBT Community - Article acknowledges that it is a problem which is directly connected to homophobia and discrimination. Remember that because when some in the anti-gay right cite this article, they will omit that part. They generally do.

Kim Davis’s Lawyers Have Said Things That Are Literally Unbelievable - This article looks at pretty much all of the distortions and lies Kim Davis' lawyers at the Liberty Counsel have spewed. In other words, it is the gay version of 'War and Peace,' i.e. one long ass article.

Wisconsin Lawmakers Have A Plan To Let People Sue Schools That Respect Transgender Students - Go ahead. Walk into the hole you are digging.

Rand Paul Says LGBT Discrimination Laws Are Unnecessary - It's times like this when I regret retreating from vulgar language.

Happy #SpiritDay! Be sure to wear your purple!

Posted by BlackTsunami at 4:45 AM No comments: