Unless you have been living in a cave with your fingers in your ears, you have heard about today's marriage equality victory in Virginia which has repercussions in Maryland, North Carolina, South Carolina, and West Virginia.

Unfortunately, SC is determined to still defend its marriage equality ban. However not so much North Carolina:

NC AG Cooper says it's time to stop defending state's marriage ban: "There are really no arguments left to be made." pic.twitter.com/0HIQCS8OK1
— Chris Geidner (@chrisgeidner) July 28, 2014

Regardless, this is rather sweet particularly when one remembers the depths the opposition stooped to in North Carolina to get the ban passed in 2012. Isn't that right, Pastor Patrick Wooden?

To make matters worse, on the night that his side won, he was filmed holding a cellphone in triumph: 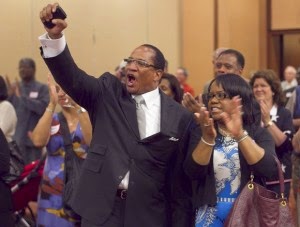 While of course this battle is far from over, I will give you one guess what Wooden can now do with HIS cellphone.

Posted by BlackTsunami at 2:49 PM 4 comments:

The Rise Of Europe’s Religious Right - The American religious right is making interesting progress in Europe. Amongst the revelations in this article, Brian Brown of NOM is attempting to create an International Organization for Marriage. So just in case stuff starts coming down, don't act as if you weren't told beforehand.


Texas Children’s Home Fires Employee Just For Being Gay - And it's perfectly legal.

Gordon Klingenschmitt Scores An Exclusive Interview With Sen. Mike Lee - Terrible news. Two homophobes close to each other in a room does not cause spontaneous combustion.

BAD ANALOGIES: Gay Marriage is Like 2 + 2 = 5 - Ben Carson, a man who took the Steve Miller song "Take the Money and Run" to heart.
Posted by BlackTsunami at 9:01 AM No comments:

'Gaystapo' is now a Christian term

Bob Eschliman is a former Newton Daily News editor who is suing the publication for violating his Christian beliefs. According to the Huffington Post:

Former Newton Daily News editor Bob Eschliman dumped from his job after a blog post he wrote which criticized what he called "the LGBTQXYZ crowd and the Gaystapo" for trying "to reword the Bible to make their sinful nature 'right with God.'" Jim Romenesko first reported on the blog in April. Eschliman was later suspended with pay, and the newspaper's owner eventually terminated his employment, the Des Moines Register reported.


Allegedly, Eschliman wrote this piece, criticizing a website which rewrites the Bible to make it friendlier to lgbts,  on his own blog. Now this fact will probably spark discussions on free speech and its boundaries.

After his firing, the newspaper following in an editorial:

. . .  the Newton newspaper published an editorial by Shaw Media President John Rung.
"Last week, he expressed an opinion in his personal blog that in no way reflects the opinion of the Newton Daily News or Shaw Media," Rung wrote. "While he is entitled to his opinion, his public airing of it compromised the reputation of this newspaper and his ability to lead it."


However, the interesting thing to me is how some in the religious right  are bending over backwards to say that Eschliman was fired for "expressing" his Christian beliefs without say exactly what he said. The American Family Association's One News Now, in its version of the story, made mention about Eschliman was a "Christian," and how he was "persecuted," but the publication never talked about his exact words. The framework of the article went about like this:

Eschliman's attorney is Liberty Institute-allied lawyer and former federal prosecutor Mat Whitaker, who tells OneNewsNow the journalist was an "exemplary" employee. "He had won many awards as a journalist and by all accounts he had outstanding performance as an employee," says the attorney. Eschliman ran into a problem, though, after he wrote about his personal religious beliefs on his blog and expressed his belief in traditional marriage. On April 30, he was placed on "indefinite paid suspension" while the company investigated his blog post. A few days later, the journalist was called into his boss's office and immediately fired and escorted from the building.


The problem I have is this - so some folks set up a webpage making the Bible friendlier to lgbts. Big deal. That's their right, just as others may feel that it was Eschliman's right to slur all lgbts because of it. What's with the ugly language he used and why do some folks say that it was "mere expression" of his Christian beliefs?"

It doesn't make lgbts look as bad or intolerant as it does Christians who have no problem with smearing gays in that manner.

And one more thing. Substitute the word "Jew" or "black" for the group Eschlimann attacked and I hardly think that his firing would be seen as a controversy.

Why is that?
Posted by BlackTsunami at 5:05 AM 1 comment: