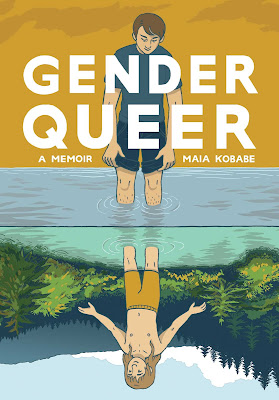 Apparently the GOP has found a new target to create hysteria amongst its base.

There seems to be a bullseye painted on the book Gender Queer: A Memoir, with legislators and other elected officials as well as the astroturfed parental concern groups and spokespeople pointing to images in the book they claim are pornographic.

In other words, they have all conveniently found a focal point and will attempt to exploit it to the fullest extent to radicalize their supporters and demonize efforts to educate people on the lives and plight of LGBTQ people and specifically our LGBTQ  kids.

It demonstrates two things  - 1. That the nonsense over Critical Race Theory is apparently dying out. 2. How easy it is for them to pivot to targeting LGBTQ Americans.

Here are just a few of the instances in which it is happening:

GOP governor bans LGBTQ book in school library as ‘obscene’ - In my state of South Carolina.

Texas Gov Launches Criminal Investigation Over 'Pornographic' Books in Schools - In Texas.
Central Kitsap School Board considers policy review after graphic novel removal
What books are being targeted at school libraries?
School board book bans on LGBTQ issues and race are hurting, not helping, students.
'
Needs to be investigated as a crime': Florida school board member files criminal complaint over teen LGBTQ book - This just in. Florida. But a different books.
Posted by BlackTsunami at 8:39 AM No comments: