This is EPIC! The Daily Show takes on the semantic argument from the religious right that gays are "intolerant" of their "intolerance" and proceeds to thrash it within an inch of its life.
Posted by BlackTsunami at 3:10 PM 2 comments: 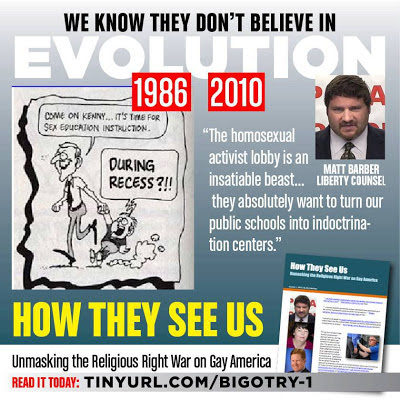 Kudos to my buddy Scott Wooledge for creating this image for my booklet. I ask that you do me the favor of copying and pasting it along to your friends Facebok. I know I have driven you all crazy with the promotion of my booklet, so it's only fair that I give you an explanation of why it is so important to me.

Through 'How They See Us,' I hope to precipitate a sea change or a war of rhetoric, if you will. Yes, I said a war of rhetoric and by that I mean a knock-down, dragged out war of words. In our zeal and eagerness to strive forward, our community often forgets the things which held us back, i.e. the dark places we were shackled due to the ignorance and hatred of others.

We forget that physical violence, negative legislation often began with lies, pseudo-science, and distortions designed to appeal to both people's religious beliefs and their fears. We now laugh at the rhetoric while forgetting how powerful it was in its past naked form and how even more dangerous it is while covertly pushed. For over 30 years, the religious right created a body of lies and junk science based on fear, exploitation, and blatant lies.

And I simply can't let it go. When I was a child, I had the unfortunate chance to be seated on the front row as this rhetoric killed a loved one. He wasn't beaten to death. No one struck him physically. They just sliced at his soul with their words and actions until his spirit was extinguished. Death was the next logical step for him.

And that's why we must never forget the lies told about our community by these organizations. How many more of us had our spirit slowly extinguished because of these lies? They are responsible for so much pain, self-hatred, suicides, near suicides (including my own), and so much more vile hatred.

That's why I get angry when I see and hear folks on our side of the spectrum take this stuff lightly. To so many, particularly our children, hearing and reading this stuff without someone challenging it is the difference between life and death.

But enough about my soap box.

Westboro Baptist Church Responds To 'Lemonade For Peace' Sale With Anti-Gay Taunt - A five-year-old takes on and defeats a hateful church and  - surprise - they are such sore losers.

Federal judge rules against nurse disciplined for comments critical of homosexuality - Good for the judge. Religious beliefs is no excuse for not respect your co-workers.

FRC back to scanning Google Images for drag queens; ENDA must be back in news - Hence the point I was trying to make with my first post.

John Oliver of the Daily Show analyzes the recent progress of lgbt equality and skewers those who oppose it.
Posted by BlackTsunami at 4:54 AM No comments: