Lies about elderly transgender men & women a new, but not unexpected low for religious right 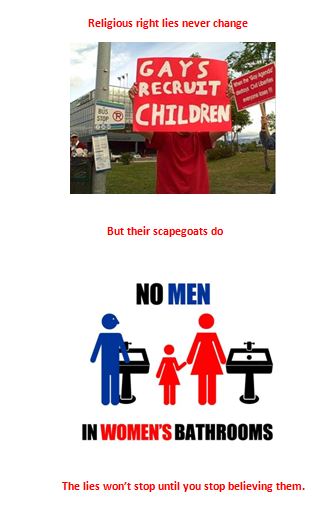 One fact which is consistent with religious right attacks on the lgbtq community is their reliance on boogeymen and horror stories. Anti-lgbtq groups and personalities are always invoking horrible semantics and ugly images of anecdotal stories (usually lies) about what would happen if any bill or action helping our community is advanced.

Anita Bryant was really the first to do this when she claimed in the 70s that a pro-gay law would allow gay men to "recruit" children. This claim was the root of her successful campaign to overturn a pro-gay law in Florida. Since then, this line of attack has been used by the religious right in opposing everything pro-lgbtq from non-discrimination ordinances to marriage equality.

But there is another boogeyman they are using. Via the hate group American Family Association's fake news service One News Now:

Some California legislators are taking another step to make sure transgendered individuals are accommodated by young and old – this time affecting nursing homes. California Senator Scott Wiener (D) has introduced SB 219, the California LGBT Seniors Long-Term Care Bill of Rights, for members of the LGBT community in long-term care facilities such as nursing homes. Karen England, head of Capitol Resource Institute in Sacramento, tells OneNewsNow the bill would invade the privacy of everyone in retirement communities "when a transgender wants to come and room with them or shower with them."

Columnist John Stewart describes SB 219 as "buffoonery" and says while it contains several provisions most evangelicals wouldn't consider objectionable, it does contain a "glaring" provision that forces employees of long-term care facilities to "use the resident's preferred pronoun." Stewart also points out it's not the first time California has forced the ideology on a vulnerable group. England agrees. England "They [promoted] mandating it in schools, kindergarten through 12th grade," she says. "Now they're mandating it with the elderly who are having to be cared for and who were trusting these facilities to make sure our grandparents and older siblings are taken care of."

The problem with refuting this is the same as refuting  horror stories about gay men and children. The difficulty lies with the execution of refutation. We have got to start calling these groups, personalities, and lies out in a wider form instead of fighting singular battles. Isn't always convenient that they have an excuse to oppose every pro-lgbtq law, ordinance, and action? And isn't it always convenient that their "reasons" involve horror stories and anecdotal evidence of mayhem, which often doesn't become reality.

So why do we fight every time they come at us with this mess as a singular battle? How often do we call general attention to the tactic they are using?

How often does anyone of us or our spokespeople who have great media exposure say something like, "Look, these groups and people are always bringing up stories about gay or transgender boogeymen. They know that a religious argument alone won't win it for them so they constantly conjure up these lies designed to mess with people's heads, appeal to their egos, or give them false reasons to oppose pro-lgbtq legislation so they don't have to admit to their own homophobia. It's all they got and they know it. They also know that what they say are lies. It's no different than racists claiming that black men live for ravishing white women. At the end of the day, it doesn't matter if they hide behind religion, it doesn't matter if it's  about schools, nursing homes, bathrooms, or anything else. We are dealing with organizations and people who are out to hinder the lgbtq community and have no problem with lying to do it because they've have lied so many times in the past with a straight face and clutching the mantle of their so-called religious beliefs."

Now how hard is it to say that and to consistently push that argument until we have a grounds for a fair conversation (for a change) when it comes to this so-called culture battle?
. . .
Posted by BlackTsunami at 4:49 PM No comments: 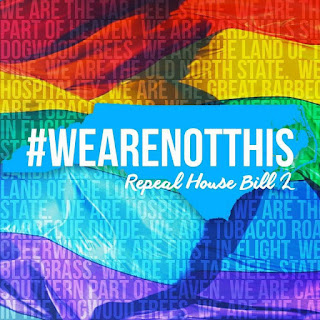 North Carolina Senate Approves Bill To Repeal HB2, Despite Objections From LGBTQ Groups - There are objections because it is actually no deal. It's not worth the paper it would be written on. Hold firm for full repeal. No deal.

It’s a first: Johns Hopkins loses points with HRC for anti-LGBTQ stance - Meanwhile, doing what needs to be done to stop the flow of anti-lgbq junk science.

Wolves in the hen house: Look who Texas recruited to promote its bathroom bill - The trillionth and one reason why it is NEVER a good idea to ignore anti-lgbtq groups. They can sneak alliances with your state legislators.

Numerous Anti-LGBT Adoption Laws Are Popping Up Across The Country - Tell me how this isn't about hate. I double dog dare you!
Posted by BlackTsunami at 9:10 AM No comments: