Batten down the hatches and alert NOM! Jimmy Kimmel explains how marriage equality will destroy humanity:

Posted by BlackTsunami at 2:35 PM No comments:

D.C. Council candidate no longer opposes gay marriage law - How sweet. A candidate the National Organization for Marriage supported turns his back on them.

DADT Would Return To Oklahoma National Guard Under Mike Reynolds' Proposed Bill - Try as he might, he won't make it happen.

Archie Comics is a long-running comic book that has added two new twists. It has included a gay character, Kevin , who has just been married to his physical therapist: 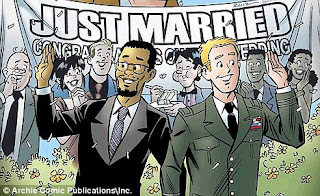 It’s really manipulative. Of course they are going to have a solider having a homosexual so-called marriage with a black, so it’s interracial, they want to work that in there, which is fine, interracial marriage is good but not between two men, and he was the physical therapist for this soldier so they’re really manipulating these kids. Here you are taking something that parents take for granted is wholesome, Archie Comics, and now even that is being turned into a promoter of the radical homosexual agenda.

. . . Obviously the left and the homosexual activist movement is dead-set on promoting homosexuality to impressionable children. This is a comic book that is supposed to represent mid-American values and they are corrupting those values. Homosexuality is for one, often linked to very severe health problems, especially male homosexuality, it’s considered immoral, since time immoral, all of Judeo-Christian history. Yet now, in the name of diversity—and it’s interesting Jim that the left’s diversity framework never seems to include former homosexuals, will we ever see a healthy, happy former homosexual in the movies or in the media in the name of diversity? It is only what the left wants diversity to be is what we see promoted.

I personally take umbrage with that comment he made earlier - "Of course they are going to have a solider having a homosexual so-called marriage with a black."

Was it so hard for Peter to say "a black man?" Through his terminology, he makes the black man sound something negative and foreign.

But then would that be as petty as Peter himself whining about a comic book?

Basically though, this ridiculous display by Peter just demonstrates how obsessed he is with the lgbtq community.

Lighten up, Peter! It's just a comic book. I guess if we followed your train of thought, Batman is indoctrinating children into dressing like creatures of the night and swinging on rooftops.

Posted by BlackTsunami at 5:13 AM 5 comments: