Comedian trolls a school board meeting. It's spooky how some folks clearly didn't get the joke 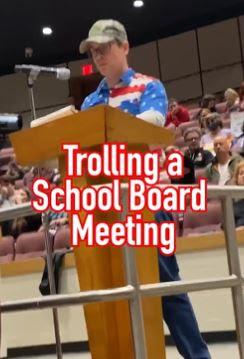 This hysteria about schools supposedly grooming kids into being LGBTQ is exhausting. It's a lie instigated by calculating people wanting to make money, get clout, or undermine LGBTQ people and our families.  But sometimes something comes along in it all which makes me chuckle.

For many progressives, local school board meetings have been the site of some pretty tragi-comic scenes recently, as right-wing activists have pushed their absurd agenda. But this week, one New York-based comedian mined the right’s anti-LGBTQ rhetoric for laughs. Walter Masterson attended a meeting of the Connetquot School District board on Tuesday night. During the public comment period, Masterson, dressed in a stars-and-stripes shirt, got up and delivered a speech satirizing conservative talking points on everything from inclusive pronouns to gun control and school choice.

As amusing as it was, some folks correctly pointed out how scary it was that some folks who applauded did so because they thought he was serious.

I trolled the school board meeting at Connetquot after they had a teacher remove the Progress Pride flag. pic.twitter.com/2gleJ73ThX

Posted by BlackTsunami at 4:05 PM No comments: