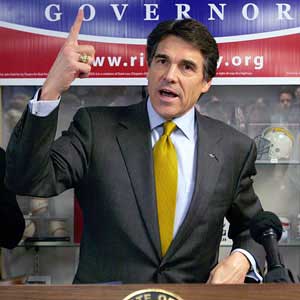 In 2006, Governor Perry stood on a stage with a pastor who said that only one percent of all gays and lesbians will live to see old age and that homosexuality is a "breeding ground for disease."

During the 2008 election, continuous scrutiny of the relationship between then candidate Obama and his pastor, the controversial Jeremiah Wright, opened a new door in how deeply the press scrutinizes not only a candidate's faith but his or her relationship with controversial religious leaders.

Almost four years later into this quandry steps Texas Governor Rick Perry. Even before his star was on the horizon as the front runner for the Republican nomination (at least for now), there were serious questions about the religious leaders he aligned himself with.

And his recent prayer event didn't quell any matters because it featured many questionable individuals including the American Family Association (which had been declared as a hate group by the Southern Poverty Law Center) and various leaders who believed a multitude of strange things, including the idea that demons rule the Democratic Party (Alice Patterson) or that the Statue of Liberty is a demonic idol (John Benefiel).

But it is in the area of gay equality in which these problems stand out. At the prayer rally, Perry aligned himself with many figures who have viciously opposed gay equality (amongst them were Tony Perkins from another hate group - the Family Research Council and Cindy Jacobs, who once claimed that the repeal of DADT was killing birds.)

But this isn't the first time Perry has teamed with pastors to not only stand against gay equality but verbally bash the gay community. According to the Austin Chronicle in 2005, Perry attended a private two-day event designed to garner him support for the office of governor and rally around a vote against gay marriage in the state.

Though the audiotape is of poor quality, there is no mistaking the fever-pitched gay-bashing theme of most of the speeches. The group is fashioned after a similar evangelical organization in Ohio that worked to pass that state's marriage amendment in November and helped produce a narrow victory there for President Bush. Critics accuse the Ohio group of operating in tandem with the Bush presidential campaign, managed by Ohio Secretary of State Ken Blackwell, now running for Ohio governor in 2006. Blackwell was one of the featured speakers in Austin. Other guests who spoke in Austin included two key players in the Republican Party of Texas – Vice Chair David Barton, a self-described Christian nationalist, and former executive director Susan Weddington, who now heads Perry's faith-based initiatives program. Weddington called Perry "a spiritual giant."

Additionally, Ohio evangelical Pastor Rod Parsley lambasted the "homosexual agenda" and railed against Islam; Arlington minister Dwight McKissic – other than Blackwell, apparently the only African-American speaker at the event – delivered a hellfire condemnation of gays and lesbians, climaxing his address with the biblical story of the fire that destroyed Sodom and Gomorrah, and declaring, "God has another match!" The crowd roared. "He said the most horrible things," the attendee said. "He was the most difficult to listen to."

The article also said that while Perry didn't make any  "directly incendiary comments," he made it clear that he supported the anti-gay marriage amendment.

The bill passed, and according to the Southern Poverty Law Center, when Perry signed the bill the next year, one pastor had some very interesting comments in defense of not only the bill, but also Gov. Perry - a defense which involved some seriously venomous and untrue comments about the gay community:

Nearly 600 evangelical Christians packed into the gymnasium of the Calvary Christian Academy in Forth Worth, Texas, to witness a ceremony on a Sunday in June. With a flourish of his pen, Texas Gov. Rick Perry signed the first bill while the televangelist at his side praised Jesus.

Gov. Perry shared the stage with celebrity Pentecostal faith healer Rob Parsley, whose television program is carried by 1,400 stations nationwide. In the audience were the leaders of two prominent family values action groups: Donald Wildmon, chairman of the American Family Association, and Tony Perkins, president of the Family Research Council.

The first document Perry signed that day was a parental notification law requiring girls under 18 to obtain parental permission before having an abortion. The second proposed that the state constitution be amended to specifically prohibit gays and lesbians from marrying. (Texas voters overwhelmingly approved the amendment this Nov. 8.)

Parsley heaped praise on Gov. Perry for "protecting the children of Texas from the gay agenda." Then he rattled off a series of shocking statistics: "Gay sex is a veritable breeding ground for disease," he said. "Only 1% of the homosexual population in America will die of old age. The average life expectancy for a homosexual in the United States of America is 43 years of age. A lesbian can only expect to live to be 45 years of age. Homosexuals represent 2% of the population, yet today they're carrying 60% of the known cases of syphilis."

The televangelist did not reveal where he got those numbers.

The article does on to say what many in the gay community probably already know about those phony numbers. They are the results of the discredited studies of Paul Cameron - a man who once claimed that gay men stuff gerbils up their rectums.

The point is this - while it is fun to laugh at Michele Bachmann's dodging of her questionable past of anti-gay activism (because let's face it - girlfriend doesn't have a chance in hell of winning any presidential election), more attention needs to be paid to Perry.

While the gay community is distracted by the antics of Bachmann and her husband, the real danger to our equality is trying to sneak into the Oval Office..

Posted by BlackTsunami at 3:18 PM 4 comments:

Perkins: Homosexuality Is "Man Shaking His Fist In The Face Of God" - For those needing to keep score, according to Perkins, homosexuality is a great sin against God but lying on the gay community is a-okay with the Man upstairs.


Christian Broadcaster Warns Parents That 'Glee' Feeds Kids a 'Steady Diet' of Homosexuality: VIDEO - Oh heck! Who told him? Geez how can the gay community take over American society when we have so many blabbermouths?

New York Clerk: Same-Sex Marriage Could Lead To Bestiality - I just don't understand some folks who call themselves Christians.

From one of my online buddies, Rod 2.0 Beta comes the news that two of the men who accused Atlanta pastor Eddie Long of sexual coercion are coming forward, even after settling the case for an undisclosed huge amount of money. Why are they coming forward? Just watch the video: