One would think that during this turbulent time of Donald Trump's possible impeachment, Americans would be able to count on some spiritual comfort.  We probably would, but don't count on it coming from right-wing evangelical leaders. They've decided whose camp they are putting their stakes in. And it's with the man causing all of the negative drama.


The Family Research Council just sent out a fundraising letter, complete with a bookmark, asking that folks pray for Trump: 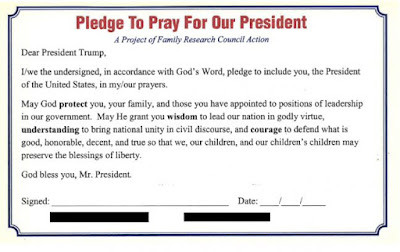 Not to be undone, the American Family Association came out with its own prayer initiative: 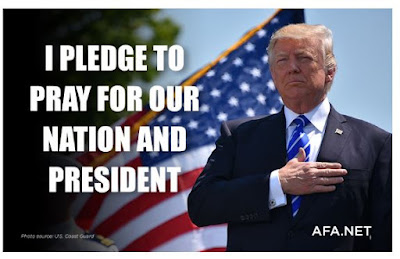 Both FRC and AFA conveniently ignore the problem that Trump's present troubles are self-inflicted because they are both too busy blaming others and spinning plots about the "secular left" or George Soros.

And then there is Trump advisor Robert Jeffress who really took the proverbial cake.

On a recent right-wing show, Jeffress claimed that Trump's recent problems with impeachment and scandal are simply because Democrats worship Moloch. Just who is Moloch you ask? According to wikipedia, Moloch is a pagan god associated with child sacrifice.

The sad fact is that there are people who believe this mess. But a saving grace is that more people do not believe it and not only that, they are very disturbed by the hysterical paranoia of Jeffress, AFA, and FRC.

And they are equally disturbed about who these religious right entities chose to align themselves during this time of chaos.
Posted by BlackTsunami at 6:39 PM 1 comment:

‘Like I had the right to be here’ - Wonderful piece about next week at the Supreme Court.

Pope meets U.S. priest attacked by conservatives for ministering to gays - Okay . . .
Posted by BlackTsunami at 9:02 AM No comments: