Sen. Jim DeMint doesn't like being called out for his homophobia

Looks like some fun has come down my way and wouldn't you know it, Sen. Jim DeMint is involved.

Supporters of U.S. Sen. Jim DeMint have contacted Charleston area television stations urging them to pull the plug on an ad featuring a comment DeMint made about homosexuals teaching in public schools, according to the group that produced the ad.

The local stations have continued to air the 30-second piece, said Warren Redman-Gress, director of the Charleston-based Alliance for Full Acceptance.

“We are really thankful the TV stations see the value in what we’re doing, and, in that first salvo, have stood by us,” he said.

The ad begins with a hypothetical question: “What if you saw this headline? ‘Senator Jim DeMint: Jews Should Not Teach Public School,’” and then swaps the word “Gay” for “Jews” in the headline.

The ad refers to a controversial 2004 remark that DeMint made about a state GOP platform item saying gays should not teach in public schools. Asked about that platform during a televised debate, DeMint said, “I don’t think they should,” adding that government should not endorse particular behaviors. “We need the folks that are teaching in schools to represent our values.”

Sen. DeMint's whine is so pitiful that I doubt anyone is falling for it. But here is the ad so you can judge for yourself:


Personally, I think that no one watching the ad would mistake Sen DeMint for being anti-Semitic. A serious homophobe, yes. But anti-Semitic? No.

Of course reasonable people should ask what's the difference between being anti-Semitic and homophobic?

Neither are things one should aspire to be, particularly if one is a United States senator.

Regardless of color, shape, or form, bigotry is bigotry.

you can view them at

Posted by BlackTsunami at 2:51 PM 9 comments:

A picture that you can all enjoy and send to your friends! 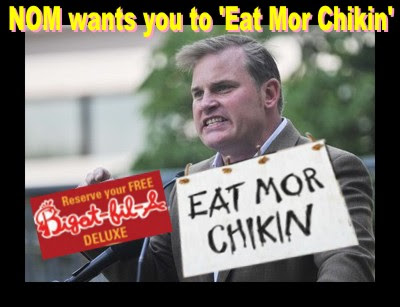 Muppets Abandon Chick-fil-A Because Of Its Anti-Gay Policies - If there was any justice, Miss Piggy would karate Brian Brown.

A new, nakedly hostile NOM era has 'Dawned' - I've written many times of this woman's claims of abuse by her gay father . But now with NOM, refuting this woman's generalizations will take on new urgency.

Gay in Cameroon: after beatings in prison, rejection at home - We need to pray for our brothers and sisters in Cameroon.

Hat tip to one of my Facebook buddies for the Brian Brown pic.
Posted by BlackTsunami at 9:07 AM No comments:

Say what you will about the National Organization for Marriage, the organization deserves some type of an award for brazen audacity. NOM has gone from demanding that businesses stay neutral in the fight over marriage equality to inviting its followers to support a business because said business is in line with its views against marriage equality. I read the following on its blog:

Thanks to your recent efforts at DumpStarbucks.com and DumpGeneralMills.com, we've shown the cultural elite, the gay millionaires who fund anti-marriage initiatives, and the biased media that the defenders of marriage are willing to put our money where our mouth is.

Well, this Wednesday, we have a chance to do it again—and this time even more literally—by coming out in support of National Eat at Chick-fil-A Day.

Imagine if folks all across the country united together in support of heroes like Dan and Truett Cathy that stand for strengthening marriage and family!

Imagine the potential impact of the message that companies favoring the radical redefinition of marriage risk fallout with their customers—combined with the message that heroes who stand for marriage and family cannot be silenced!

Imagine how clearly that message would be heard across the nation if Chick-fil-A reported record sales this Wednesday!

On his radio show this week, Mike Huckabee called on his listeners to support the principled stand of the Cathy family by making this coming Wednesday (July 25th) "National Eat at Chick-fil-A Day."

Please join me this Wednesday in supporting this courageous company, while at the same time sending a powerful message of support to every individual and every company with the courage to stand for marriage.

Visit your local Chick-fil-A restaurant for lunch or dinner on Wednesday. Better yet— stop and tell the manager that you're there to honor and respect the integrity, faith and courage of Dan Cathy and the Cathy family.

A commentator on the same blog post put the issue in an eloquent perspective:

This discussion shouldn't be about the positions of Starbucks, General Mills and Chick-fil-A. The discussion should be about NOM and the double standard they seem to applaud. If NOM had never mentioned the "neutral stance" this discussion wouldn't even take place. But since they shook their finger at Starbucks and Gen. Mills for speaking out and supporting marriage equality, NOM has effectively said: "even though Chick-fil-A is not neutral, we are going to break our own principles and applaud them for not staying neutral on the subject." So the question is, why would we take NOM's principles seriously if they don't seem to do themselves?

Posted by BlackTsunami at 4:51 AM 5 comments: