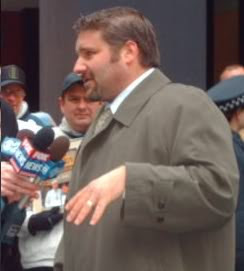 From Wayne Besen and Truth Wins Out comes news of a possible feud brewing between Peter LaBarbera and the Liberty Counsel with Exodus International thrown in as a side diversion.

And wouldn't you know it? It's about lgbt sexual encounters The feud stems from a piece LaBarbera wrote for his group in an attempt to keep GOProud, a gay conservative group, from co-sponsoring the Conservative Political Action Conference:

It boils down to this: there is nothing “conservative” about — as Barber inimitably puts it — “one man violently cramming his penis into another man’s lower intestine and calling it ‘love.’” Or two women awkwardly mimicking natural procreative relations or raising a child together in an intentionally fatherless home. This does not mean that people practicing those and other immoral (andchangeable) behaviors cannot think and act conservatively on other issues like lowering taxes, cutting government spending, ending abortion, etc. But let’s be honest: the “proud” in GOProud is not about pride in opposing the death tax, or defending the right to bear arms; it’s about proudly embracing sinful homosexual behavior – and that is hardly a conservative value.
But, as Besen notes, the Liberty Counsel responded, claiming that Barber never made such a statement: