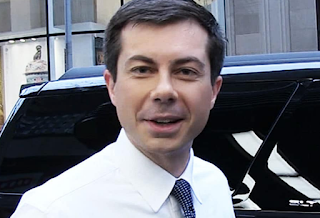 I was too busy celebrating the holidays so I missed a very interesting item which took place last week. Apparently openly gay presidential candidate Pete Buttigieg is bringing all of the homophobes out to condemn him. First Franklin Graham, then Don Boys.

Now this guy via an article from The Christian Post:

“I’m a registered non-affiliate, so I don’t want you to think I’m in any party. I’m for the Lord and what is right, but it is a disgrace that we live in a country where, if a person of color dons a ‘Make America Great’ hat, people now, on MSNBC and other news agencies, they call that hat a trigger ... But you can invite a man married to man to a Christian church and there is no outcry,” Wooden declared in a message to his church earlier this month. “Something is wrong with that. And the only way to get you to buy into that, they’ve got to try and get you to ignore the Scriptures and to take Jesus Christ out of the public eye.”


Wooden was upset about Barber hosting Buttigieg at his church on Dec 1.  The Christian Post points out that during the event Barber addressed the so-called divide between the LGBTQ and black community. He called it a "false narrative." He also said we must address issues of poverty and social justice instead of being exploited by false narratives:

“Just to clear the house, because I know it’s out there, we here to talk about poverty. Somebody sent me this question: ‘What are you gonna say to the mayor about being gay?’ I said, ‘Nothing.’ That’s not a Bible question. You don’t see Jesus raising that. It’s not a constitutional question. There’s no constitutional provision. I just got on a plane and flew four hours from Arizona here. I ain’t ask the pilot was he gay, but I did ask him could he fly the plane,” Barber said to applause.

“My surgeon, I don’t ask him if he’s gay. I want to know, can he do the surgery? And right now, what we’re looking at is, are there candidates who can have the political courage, wisdom to address the issue of poverty and the interlocking injustices. That’s the question before us. … We need to kill some of these false narratives,” he asserted.