Peter LaBarbera seems to be carrying his nonsensical vendetta against Progressive Insurance to another level.

And bear in mind, it's not because Progressive has harmed him in any way. Peter objects to the fact that Progressive Insurance has the temerity to not only treat its lgbt employees with respect, but also support lgbt causes.

After posting a letter from someone who supposedly canceled his insurance because of Progressive's support of the lgbt community, LaBarbera is continuing the same vein of lies in his newest post by claiming that not only Progressive but other corporations fund and support lgbt pride parades. 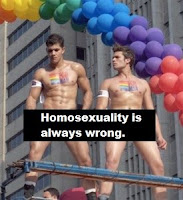 And the picture he uses to push this nonsense is the same one I talked about this morning - the picture of two go-go dancers from a gay pride in Sydney, Australia. 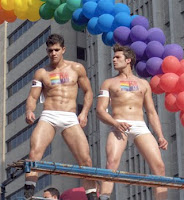 But Peter distorted this picture to give the impression that the dancers are naked.

Nor does he offer any evidence that any corporation, Progressive included, funded this parade.

By linking Progressive and other corporations to lgbt pride parades while posting a distorted picture having nothing to do with them, LaBarbera is sinking low.

It's the equivalent of fanning people's racial prejudices by posting a picture of a kissing interracial couple.

Peter seems to be on a "streak" here. My guess is that on a daily basis, he will be "revealing" more information about how Progressive pushes the so-called gay agenda. Bear in mind that LaBarbera most likely already has a reservoir of information which he will pervert.

By pushing the phony angle of "it's worst than what we thought," LaBarbera will reveal the information bit by bit for the purpose of suspense.

Allow me to take a possible morsel from his mouth. It's about the Peter Lewis, the owner of Progressive. He will be receiving the 2010 America's Future Lifetime Leadership Award from Campaign for America's Future for his funding of progressive causes.

It's a wonderful honor but watch, if LaBarbera mentions it, how he will try to tarnish the occasion by accusing Lewis of trying to undermine "family values" in the same manner others on the right attack George Sorors for his funding of progressive causes.

But the most annoying part of LaBarbera's afternoon diatribe is this statement.

This is how we regain our culture: taking one principled stance at a time, and using our considerable power as consumers to defend morality and truth. In the last decade or so, the corporate world was essentially ceded to the “gay” lobby without much of a fight — while pro-family advocates were busy opposing the homosexual activist political agenda in Washington, D.C. Now look at the tragic result: major corporations are using their immense resources to promote sexual immorality and gender confusion throughout society. And the agenda they are financing wars against Biblical values and directly threatens YOUR religious freedom.

One wonders: what have the Christian employees been doing all these years at companies like Progressive? Why haven’t more people of faith spoken up in their place of employment — urging their superiors not to waste valuable corporate resources to fund and promote the homosexual and transsexual agenda? And why aren’t more Christians and moral advocates demanding true corporate “diversity” — which includes respecting those employees who support real (man-woman) marriage and who oppose homosexual practice and gender confusion?

First of all, this is not your culture alone nor is it your country alone. You have neither title nor deed to it. It belongs to all of us, lgbts included. The fact that you can't share is none of our concern because the truth is that you will share it all, one way or the other.

Lastly, what do Christian employees do, Peter?

True Christians, employees or otherwise, would recognize the fact that lgbt employees have every right to be as open about their lives and families as they do.

And at the very least, they don't post distorted pictures of go-go dancers.

Again I would suggest that readers call Progressive Insurance and thank the company for its policy of fairness. And offer congratulations for Peter Lewis on his award. Call Progressive at 1-800-PROGRESSIVE (800-776-4737) or fax your own letter to 800-229-1590.  (A Progressive phone/e-mail contact page is HERE.)

How The Rekers ‘Rent Boy’ Scandal Could Undermine Prop. 8 Supporters’ Court Battle - The Rekers scandal is like the gift that keeps on giving to the lgbt community.

Malawi “People Like You” Given 14 Year Sentence - This is disgusting. We all need to keep the Malawi couple in our prayers.

Montgomery College picks new president - And she is African-American too! Yes it is a big deal because we need more lgbts of color in the public eye, especially intelligent, successful ones.

Rand Paul On 'Maddow' Defends Criticism Of Civil Rights Act, Says He Would Have Worked To Change Bill - Not necessarily an lgbt issue per se . . . then again maybe it is.

Barber: "Solicitor Kagan, Do You Identify as a Lesbian?" - The hot mess that is Matt Barber.

Peter LaBarbera seems to be in a good mood this morning. Naturally this means trouble for the lgbt community.

The source of his merriment is that his nonsense regarding the lgbt community has resonated with at least one person.

Peter reprinted a letter from a man in Texas who canceled his car insurance with Progressive after reading Peter's post about its support for the lgbt community. The following are snippets:

The GLBT agenda violates my core fundamental beliefs. Please allow me to clarify this … I am a firm supporter of equality; when it pertains to one’s ethnicity, skin color, natural gender, or age. I adamantly oppose the oppression of any human being, by any individual, or group. I am a man of principle and a man who seeks to bring about peace. In layman’s terms, I am the bigger kid on the playground that pulled the “bully” off the smaller kid.

What I am opposed to in this situation is not a person, nor a group of people, but rather an “Action.” An Action that I find to be repulsive and a shock to the conscience. Not only because of my spiritual beliefs, but by my instinctive and natural human ability to decipher between what is right and what is wrong.

. . .Frankly, I could care less what others do in their private time. I do not ask and I do not want to know. It is a discussion that should be left outside of the main streets of our society and confined to the privacy of one’s own home.

However, rather than leave this controversial “Action” to the confines of one’s own personal life, your company has publicly elected to endorse a movement that seeks to promote an “Action” that I find to be unnatural, immoral, and contrary to any teachings I would want my children exposed to.

The GLBT movement seeks to pursue a public campaign, whose primary goal is to re-define what I am naturally programmed to believe. Therefore, I ask you: Why would your respected organization support a movement that forces such an offensive position upon my family and me, with little to no regard for my religious, moral, or natural beliefs?

The letter left me scratching my head regarding this man's ignorance. Then I took at look at Peter's posting which supposedly led him to cancel his insurance. 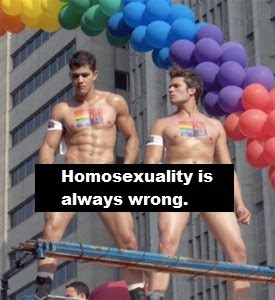 There are so many things wrong with this picture. First of all, the guys aren't naked, as the original source photo shows. But Peter is clearly implying this.

Secondly, it is a pride parade in Sydney Australia, having absolutely nothing to do with Progressive Insurance or its policy of fairness to the lgbt community.

But we all know that LaBarbera posted the picture to infer the phony idea that the lgbt community is a danger to the sanctity of America (and a serious detriment to children) and through its hiring policies, Progressive Insurance is somehow promoting this mess when the truth is merely the fact that the company is practicing basic fairness in its employment policies.

Granted, I'm sure the idea of naked go-go boys would most likely get them more premiums but come on, Peter. You know you told an outright lie here.

You baited the hook with the usual  homophobic tripe and managed to catch a little fish.

One more thing - I was reluctant to link to  LaBarbera's piece because he included the man's name and address. I would sincerely hope that anyone reading this post would have the good sense to recognize a trap when they see it.

Regardless of how angry you get, DO NOT  contact this man in any way. The last thing we need is another phony martyr of the alleged "gay menace.

I would suggest that you call Progressive Insurance and thank the company for its policy of fairness.

Posted by BlackTsunami at 4:57 AM 2 comments: Links to this post