The 'Dangers' of Homosexuality in 1966

Call me sadomasochistic for it, but there are times in which I like to look read past articles or look at past videos which show the world when things weren't as positive towards the LGBTQ community. That's not to say that things are all okay for us at the present, but a look in the past adds perspective to where we are and where we need to be going.

And this video is a doozy. It's a clip from a PBS special (American Experience) about the Stonewall Uprising and it features a police office, John Sorenson, lecturing 8th graders on homosexuality in 1966. Needless to say Sorenson is not a fan of our community. During that time, homosexual acts were against the law in a wide majority of states. And Sorenson was determined get across these laws would be prosecuted to their fullest extent.

Detective John Sorenson, Dade County Morals & Juvenile Squad (Archival): There may be some in this auditorium. There may be some here today that will be homosexual in the future. There are a lot of kids here. There may be some girls here who will turn lesbian. We don't know. But it's serious, don't kid yourselves about it. They can be anywhere. They could be judges, lawyers. We ought to know, we've arrested all of them. So if any one of you, have let yourself become involved with an adult homosexual, or with another boy, and you're doing this on a regular basis, you better stop quick. Because one out of three of you will turn queer. And if we catch you, involved with a homosexual, your parents are going to know about it first. And you will be caught, don't think you won't be caught, because this is one thing you cannot get away with. This is one thing that if you don't get caught by us, you'll be caught by yourself. And the rest of your life will be a living hell.

Virginia Apuzzo: I grew up with that. I grew up in a very Catholic household and the conflict of issues of redemption, of is it possible that if you are this thing called homosexual, is it possible to be redeemed? Is that conceivable? And that, that was a very haunting issue for me. I entered the convent at 26, to pursue that question and I was convinced that I would either stay until I got an answer, or if I didn't get an answer just stay.

There are people and groups who want to bring this horror back. If not via letter of the law then definitely by spiritual connotation. They want us to be so scared that we don't live our lives authentically for fear of repercussions which would serve to remind us of how supposedly undeserving we are. Psychological cages are just as awful as physical ones.

Don't fall for it. And don't let the fear stop you from being who you are and for fighting for us all. It says a lot that if someone like Sorenson made such a speech today, all hell would break loose. That's what our community did. His nonsense is what we have defeated time and time again. And will continue to defeat in all of its ugly forms.
Posted by BlackTsunami at 5:06 PM No comments: 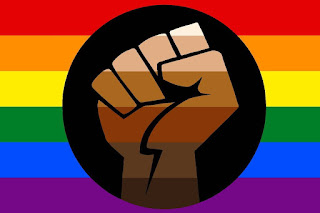 LGBTQ self-defense classes are gaining popularity around the world - Yep. I totally approve of this. People are becoming stupider than before.

E.W. Jackson: ‘Homosexuality Is Not Normal and Normal People Find it Disgusting’- Yet he can't stop talking about gay sex.

Brazilian YouTuber Hands Out Free LGBTQ Books in Protest of Censorship - Try to hold us down and we find new ways to rise.
Posted by BlackTsunami at 8:32 AM No comments: