The following letter, written to President Obama from 10-year-old Sophia Bailey Klugh highlights the simple fact that often times when we talk about allowing gay and lesbian couples to marry under law, we aren't talking solely about the couples protecting each other. We are also talking about protecting their children: 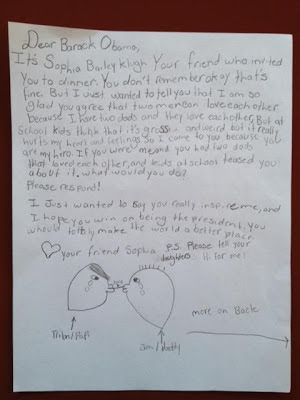 See this Huffington Post article by Jamie McGonnigal, founder of TalkAboutEquality.com, for the full story behind this poignant letter.

Posted by BlackTsunami at 3:23 PM No comments:

Biden Calls Transgender Discrimination “Civil Rights Issue of Our Time” - And he makes a good point, too.

Opponent’s Facebook Scam: Sudden Spikes in “Like” Numbers, International “Favorite Cities” Suggest False, Inflated Fan Base - Looks like the opponents of marriage equality in Washington state are running a scam.

Posted by BlackTsunami at 9:35 AM No comments:

HUCKABEE: Many issues are at stake, but some issues are not negotiable: The right to life from conception to natural death. Marriage should be reinforced, not redefined. It is an egregious violation of our cherished principle of religious liberty for the government to force the Church to buy the kind of insurance that leads to the taking of innocent human life. Your vote will affect the future and be recorded in eternity. Will you vote the values that will stand the test of fire? This is Mike Huckabee asking you to join me November 6th and vote based on values that will stand the test of fire.


Because of this video by Mike Huckabee, I can safely say that this election has pushed Christianity back so far, I am surprised I don't have soldiers from the pre-Elizabethan period of English history knocking on my door talking about "the true faith" and arresting me for "heresy."

And it's also where I want to get off of the world. Forget "stopping the world," I will just jump off and take my chances of landing on my feet.

What the hell is going on here?

How many folks have implied thus far that if we don't vote the way they want, we are going to hell or our immortal soul is in danger? Who in the hell gave them secret clues?

Or in this case, what does Mike Huckabee know about souls? Who appointed him? Couldn't God find someone who seems less self-righteous and hypocritical? Better yet, who is he to imply about "persecution?"

Let me put in a less kinder, gentler way.

Mike Huckabee is a psychologically bloated SOB who emphasizes what's wrong with Christianity in this country. What's a man with a six-figure salary, his own television and radio show, expensive suits, and more than one house know about persecution of any type?

And to solely put Huckabee in this category would be wrong. You could say the same about the Family Research Council's Tony Perkins or the American Family Association's Bryan Fischer.

You could say the same about any religious right figure with a convenient six-figure salary and an expensive suit you see on television, hear on the radio, or who crawls out of the warm swamps of self-righteousness in order to exploit anecdotal incidents to fool the evangelical masses that their "religious liberties" are in danger or that "pagans" (and of course that includes gay folks) are taking their country away from them. The country that God gave them as Christians.

How do we know that this last part is true? Why because Christian historian David Barton has verified it. Who cares how many times he has been discredited or refuted.

It would almost be humorous to sit back and analyze how Huckabee and company have padded their own egos and salaries feeding on the fears of Christians with visions of false entitlement.

But for those of us who don't share their beliefs and are the victims of their lies while observing how they travel in media circles of power, it's not humorous at all.

It's downright infuriating. And for those who consider themselves as Christians, it should be downright embarrassing.

It's all a lie. A con-game. A 21-century version of televangelism at its worse recreated for an audience smart enough to work the internet but dumb enough to not realize that they are being played like a harp.

Posted by BlackTsunami at 4:42 AM 3 comments: