A day after his awesome interview with anti-gay spokesman Michael Brown, radio host David Pakman sat down with another figure from the anti-gay industry, Paul Cameron.

Cameron can be called the religious right's dirty little secret. It was he who in the 80s came up with the idea of aggressively using science to prove that homosexuality is a "dangerous lifestyle." The problem is to do this, Cameron attained a reputation for either distorting legitimate science or distorting his own work to gain the conclusions he wanted from his "studies." He has also been discredited and censured by many group and individuals on the left, the right, and in the middle due to his bad research techniques. Several of his studies have been criticized for such errors as having small sample sizes, showing an anti-gay bias in interviews, and not having enough responses to establish a suitable analysis.

Of course the religious right still cites his work, but are very careful not to mention him by name. Of course there are some, such as Peter LaBarbera, who will deliberately cite Cameron's work, even though he knows that the work is flawed.

And there are others, like the National Organization for Marriage who, when caught citing Cameron, will turn backflips in order to distance themselves from him.

Cameron found himself in the news recently for comments he made regarding President Obama's recently announced support of marriage equality. During an interview with Christian radio station, Cameron asserted that Obama was gay. He also said that one of the prime goals of the gay rights movement was to introduce homosexual sex acts to children.

Naturally, Pakman pressed him on these claims, revealing an interview which is was at times pathetic, infuriating, and sad.  Cameron, in an offhand and flippant manner, reveals a terrible childhood incident which most likely put him on the road to destroying so many lives in the lgbtq community with his lies. And although the interview did not delve into the specificity of these lies in a manner which I would have liked to, it is still an excellent job by Pakman at deconstructing the sad mind of a man consumed with reducing the gay community to wanton sex acts.

I came out of it feeling a twinge of pity for Cameron, but not enough pity to ignore the damage he has done to the lgbtq community over the years:

Posted by BlackTsunami at 3:44 PM No comments:

PFOX Complains to School Board - Imagine that. Suing a school district so that you can peddle inaccurate and negative information about the gay community to children.

Video: Pastor treats local sewer to tasty Starbucks - Rule One about boycotting a company - you don't buy the company's product to demonstrate that you are boycotting against it.

Talk Honestly to Black Opponents of Gay Marriage - Excellent piece by Keith Boykin. And remember that not every black opponent of marriage equality is a Harry Jackson or Patrick Wooden.

Obama Confronts GOP’s Anti-Gay Agenda, Threatens Veto Of ‘License To Bully’ Bill - Good for him. The bill needs to include same-sex couples.

Congressman Maintains It Should Be Legal To Fire Someone For Being Gay, Attacks ThinkProgress - Think Progress got him dead to rights and yet he still says he was unfairly attacked. And now he says he is being threatened. Blah, blah, blah. Bear in mind that I am not trying to trivialize any threats but come on now. That's always the defense of homophobes. - i.e. that they are being attacked for beings "Christians" and then "someone" is threatening them.

Homophobic Maine group may help cause of marriage equality


Earlier this month, the Portland Press Herald announced the creation of a third anti-gay group fighting this November’s voter initiative to legalize same-sex marriage in Maine – the Maine Marriage Allies PAC, which will be a project of the ironically named Maine Equal Rights Center (MERC). On its Facebook page, MERC is described as a “grass roots campaign to educate voters on same sex marriage.”

Equality Matters also points out that while this group is fighting marriage equality, its presence may actually help the cause of marriage equality because of the information it is trotting out to smear the lgbtq community:

MERC’s website, however, is a deluge of misinformation, confused political analyses, and some truly cringe-worthy writing.

The website is organized into a number of tabs meant to provide visitors with information about the proposed marriage initiative. Each tab varies wildly in content and tone; some inexplicably focus on criticizing the federal Defense of Marriage Act (DOMA) while another includes an image of President Obama riding a unicorn.

That would be this picture: 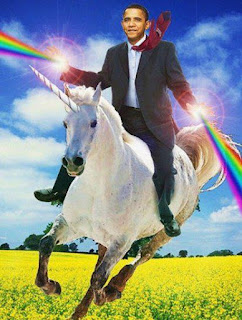 Equality Matters also points out that the founder of this group, Erik Bennett, is a failed politician with a penchant for bizarre youtube ads and vicious homophobic slurs:

One wonders what the National Organization for Marriage thinks about Bennett. All in all, it promises to be a very interesting time in Maine.

Posted by BlackTsunami at 4:33 AM No comments: