Black lgbts shouldn't be seen as weak or invisible 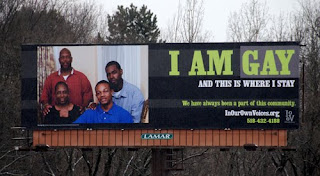 If you want to see why it's so hard for lgbt of color to get any type of acknowledgment, then a situation in Schnectady, New York should give an indication.

Apparently some people there are not happy with the billboard seen above:


Billboards trying to drum up community support for gay black men were criticized Monday as a pastor, a daycare provider and a City Council member called for the billboards to come down.

The Rev. Alfred Thompkins, of Calvary Tabernacle, said the “I am gay” billboard message only encourages troubled youth to embrace homosexuality.

“A thirteen-year-old looks at these billboards and says, ‘That must be it, I must be gay,’ ” he said. “That goes directly against God’s purpose. As a resident of Schenectady, a pastor who works with young people, with families, frankly I’m really bothered by the message these send.”

The billboards offer three messages, showing gay men with their families, in church and on a basketball court. Each message starts with the announcement “I am gay,” in large letters, and concludes with, “We have always been a part of this community.”

They were designed by In Our Own Voices, a gay advocacy group in Albany. The state Department of Health paid for the billboards as part of an effort to find a more effective way to reduce the HIV infection rate, which has disproportionately hit gay and bisexual black men. Last year, the Centers for Disease Control said the epidemic had reached such a level that new methods must be found to encourage men to use condoms.

Our Own Voices says that the billboard is created to garner acceptance of homosexuality, which in turn will cause gay men to lead healthier lives. Others have voiced opposition to the billboards because they supposedly allow "inappropriate sexual expression," a reason which doesn't make any sense at all because there nothing on the billboards with anything having to do with sexual intercourse.

And probably the most insulting comment from one person (the same one pushing the ridiculous idea of "inappropriate sexual expression") is the belief that the billboards should be moved to "adult business zones."

The sad thing is that this controversy reveals the ignorance of some in the black community regarding lgbts of color.

I got news for Pastor Thompkins - 13-year-old lgbts already exist. The billboards' presence is irrelevant on that point. But the billboards are a much better message to these children than seeing a weak, flamboyant, oversexed gay man or an overly sexually aggressive lesbian, or a confused transgender out to "trick" a man to have sex with her - three stereotypes that are unfortunately prevalent in the black media these days.

And the idea that being an lgbt is strictly a lifestyle about sex is a huge lie. According to a report by the National Gay and Lesbian Task Force which looked at data from the 2000 Census report:

What this is about is the deliberate inability of the African-American community to acknowledge the presence of lgbts of color.  And that inability leads to the ignorance that we are seeing here. It's really a catch-22 situation because while I am not happy with the nonsense these folks have expressed, I know what will happen when this issue is discussed by some members of the lgbt community.

It's going to be transformed into a back and forth argument on whether lgbts are racist or are African-Americans homophobic.

Meanwhile, lgbts of color - that's us folks in the middle - will be ignored or rather seen as a prize to be won by whichever group can prove that they suffered more than the other group.

Bottom  line to me is this - the billboards are an excellent idea and those who agree with this point should not allow themselves to go off on tangents. The issue is about the safety and health of lgbts of color and that's where the issue should stay.

Posted by BlackTsunami at 2:51 PM 4 comments:

$100,000 to stop marriage equality? and other Tuesday midday news briefs

NOM To Spend $100K Opposing Marriage in Rhode Island - Where exactly does the National Organization for Marriage get its money?

The Bombast and the Body Count - Such things are dangerous.

Transgender vets want military access for own - An excellent article featuring an online buddy of mine, Autumn Sandeen.

Ugandan Opposition Leader Calls for Decriminalization - We can only hope that his call will be heeded.

Ontario Catholic School Board to Reconsider Ban on Gay-Straight Alliances Following Board Member's 'Nazi' Remarks - I'll believe it when I see it.

Our anti-gay, "limp-wristed" friend Matt Barber seems to taken time out from his homophobic ramblings to delve into comedy.

He probably doesn't think so, but anyone who thinks that zany Congresswoman Michele Bachmann is presidential material has to be delving in loony territory.

And Barber just doesn't express the idea that Bachmann is presidential. He deems her as (Ronald) "Reagan in pumps":

From the instant his fruitful eight-year reign ended, Republicans have pined for the next Ronald Reagan. To date, no man has succeeded in filling the conservative standard-bearer's legendary boots. Well, maybe it's time to swap boots for pumps. Could he be a she?

Forget a Senate run. The buzz inside the Beltway is that Mrs. Bachmann may be looking to add a woman's touch to the Oval Office (beyond just sprucing up its temporary occupant's eyesore decor). Her spokesman, Doug Sachtleben, has confirmed to media that the congresswoman is considering a potential presidential run, saying: "Nothing's off the table."

Barber's rambling for me seems to shift the question of is Bachmann serious to the much better question of has Barber been smoking banana peels? In all honesty, one might think that Barber is angling for a seat in the Bachmann Administration (makes me ill just to mention those two words) should the planets align right, donkeys begin flying, and Bachmann actually does take a seat in the Oval Office.

Of course word to wise to Bachmann - maybe having Barber giving you platitudes is a potion for disaster. After all, he was one of the folks who deemed disgraced beauty queen Carrie Prejean as the latter-day Queen Esther.

And you see what happened to her.

Posted by BlackTsunami at 5:37 AM 2 comments: