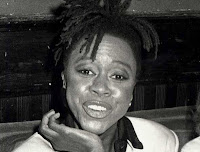 Danitra Vance was under utilized when she was a member of the Saturday Night Live cast and that is a real shame. She was an excellent comedian as the above sketch clearly shows.

Born in Chicago, Vance graduated from nearby Thornton Township High School in 1972. In high school she was active in theater and was a member of the debate team. She later attended Roosevelt University and graduated with honors. She then studied drama at Webber Douglas Academy of Dramatic Art.

Vance was the first African American woman to become a SNL repertory player (not to be confused with Yvonne Hudson from season six, who first appeared as a recurring extra and was hired as a feature player), and was the first lesbian cast member hired (though her sexual orientation wasn't known until her death in 1994). She is best remembered for the sketch "That Black Girl", (a spoof of the 1960s sitcom That Girl), and for her character Cabrini Green Harlem Watts Jackson, a teenage mother who dispensed advice on the do's and don'ts of being pregnant. Both were recurring characters during her time on SNL.

Vance appeared on SNL during a time of great transition for the show; Vance herself became frustrated because her roles in sketches were limited both in visibility and in range - she was often cast in a skit as a secretary, a nurse, a waitress, a young unwed mother dependent on welfare (her recurring character, Cabrini Green Jackson, easily fell into this category), or a maid. This was made evident during the episode hosted by Oprah Winfrey in spring of 1986 where in the cold opening, Vance played Lorne Michaels' personal slave (in the guise of 'Celia' from The Color Purple) who convinces him to force Oprah into performing stereotypically black roles by beating her (as Oprah's character 'Sofia' was in the movie), only to have Oprah strangle him in a headlock before shouting the show's opening line. In a short musical sketch on the same episode, Vance sang "I Play The Maids" (a spin on the Barry Manilow song, "I Write The Songs"), a satirical song that expressed frustration over black actresses (and herself) being typecast as maids in films and on television shows. Ironically, one of Danitra Vance's celebrity impersonations was of Cicely Tyson (in The Pee Wee Herman Thanksgiving Special sketch), who avoided film or TV roles that stereotyped black women.

Perhaps adding to her frustration was her dyslexia which, according to an SNL Trivial Pursuit question and testimony from Al Franken for the book Live From New York: The Uncensored History of Saturday Night Live, made it hard for her to read from cue cards and memorize lines (though it wasn't made apparent in most of her appearances).

Vance ultimately chose to leave SNL at the end of the season (along with many other cast members from that season who were fired, including Joan Cusack, Robert Downey, Jr., Randy Quaid, Terry Sweeney -- another homosexual cast member who was hired for the 1985-1986 cast — and Anthony Michael Hall).

She was awarded an NAACP Image Award in 1986 and later won an Obie Award for her performance in the theatrical adaptation of Spunk, a collection of short stories written by Zora Neale Hurston.

Vance was the second female lead opposite Nancy Allen in Limit Up, where she played a guardian angel on assignment for God being played by Ray Charles. She had small roles in The War of the Roses and Little Man Tate and a more significant role in Jumpin' at the Boneyard, for which she was nominated for an Independent Spirit Award.

Diagnosed with breast cancer in 1990, Vance underwent a single mastectomy and incorporated the experience into a solo skit, "The Radical Girl's Guide to Radical Mastectomy." The cancer recurred in 1993 and she died of the disease the following year in Markham, Illinois. She was survived by her longtime companion, Ms. Jones Miller.

Catholic Bishops: ‘Religious Liberty’ Includes Right To Discriminate Against Gay People, Impose Values - Because apparently it's "persecution" to not be allowed to use gay tax dollars while you discriminate against gay people.

Partisan NOM bullies now bullying NH Republicans - A certain group is getting too big for its britches.

PTA chapter in NY addresses needs of gay students - This is pretty cool!

Linda Harvey Decries Gay-Rights 'Radicals' who are 'Out to Wreck' Morality and 'Legitimize Deviance'- Enjoy a good laugh brought to you by crazy Linda Harvey.

El Paso Mayor John Cook, Recall Target, Takes Stand Against Anti-Gay 'Bigotry' - Meet one of my new heroes - the mayor who is catching hell for standing up for gay equality.

Matt Barber of the anti-gay Liberty Counsel is upset.

Apparently a new study has confirmed what many of us knows when it comes to how homophobia hurts gay health:

A conservative attorney disagrees with the findings of "Private Lives 2," a study of Australian homosexuals that suggests discrimination, not lifestyle, is the reason why homosexuals seek psychological counseling -- a conclusion similar to that reached by the American Psychological Association.

The online study was conducted by Malbourne's La Trobe University with the support of Gay and Lesbian Health Victoria, as well as the Victoria state government and the Australian national depression initiative. But Matt Barber, vice president of Liberty Counsel Action, tells OneNewsNow other research has repeatedly concluded that it is the lifestyle -- not discrimination or lack of societal "acceptance" -- that results in homosexuals seeking counseling.

He believes groups like the APA have lost credibility over the years by suggesting otherwise.

"The APA has really in large part simply become a political activist organization," Barber decides. "They are no longer objectively a scientific group that views things through an objective prism; but rather, they are pushing a political, sexual, anarchist agenda."

He says the APA is helping "to facilitate" those caught up in the lifestyle to continue a destructive, unhealthy, immoral and biologically wrong way of living and thinking. "So for the APA to help them rationalize these behaviors, it's really irresponsible of the American Psychological Association to do this," the attorney submits.

That's the gist of the article. Barber offers no proof of his claims that the APA is a "political organization." Nor does he offer up any of the "other research" which supposedly concludes that the supposed homosexual lifestyle is the reason for depression in gays.

You see the Australian study refutes theories put forth by Barber and other religious right phony experts that homosexuality itself is a dangerous "lifestyle." Usually when folks like Barber push this notion, they cite health statistics, like those from the Centers of Disease Control.

But no legitimate study nor any medical organization has ever said that homosexuality in itself is a "dangerous lifestyle." They usually cite outside factors, such as homophobia.  The following is what the CDC said when it comes to HIV/AIDS amongst gay men:

Stigma and homophobia may have a profound impact on the lives of MSM, especially their mental and sexual health. Internalized homophobia may impact men’s ability to make healthy choices, including decisions around sex and substance use. Stigma and homophobia may limit the willingness of MSM to access HIV prevention and care, isolate them from family and community support, and create cultural barriers that inhibit integration into social networks.

Racism, poverty, and lack of access to health care are barriers to HIV prevention services, particularly for MSM from racial or ethnic minority communities. A recent CDC study found a strong link between socioeconomic status and HIV among MSM: prevalence increased as education and income decreased, and awareness of HIV status was higher among MSM with greater education and income

To put it more succinctly, Matt Barber is  typical of the religious right spokespeople. When researchers come out with something they disagree with, they whine about how gays have "infiltrated" or simply cherry-pick the research to push their bogus conclusions about the gay community.

Barber has no expertise in science, research, or health. The reason why he didn't cite any proof to back up his charges is because he doesn't have any.

And he knows it.

Posted by BlackTsunami at 4:49 AM 5 comments: