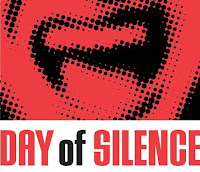 April is here which means it's time again for the Day of Silence (April 16), the event held by GLSEN in which participating high school students nationwide do not talk during an entire school day in protest of the problems faced by lgbt students.

It's also time again for religious right groups to push their sad counterpart, Day of Truth, in which other students are encouraged to dissuade the supposed gay agenda.

Let's be honest. The Day of Silence has been a huge success every year while the Day of Truth has been a flop. I guess this is a case where the young has more sense than adults when it comes to accepting their lgbt peers.

So this year, the Day of Truth seems to have gone through a change in an attempt to seem hip and appeal to the young.

Its webpage is really cute and there seems to be a "we just want to start a conversation" vibe going on.

And of course there is that semantic claim that the Day of Truth preaches true tolerance for "those who make not agree with the homosexual agenda."

But don't be fooled. Like all other vestiges of the religious right, the Day of Truth is peddling inaccurate information about the lgbt community and the majority of it is contained in its resource guide page.

There is a pdf file from written by "Mike," a supposedly former gay young man, called Homosexuality isn't the answer. This is some of the things he says:


Many researchers have studied how gay-identified people live. The research has convinced me that embracing homosexuality is not the satisfying dream-come-true that society makes it out to be, even for those who are exclusively attracted to the same sex. Let’s look at how.

Research has shown that many gay-identified men, over their lifetime, have a lot of partners. In the 1980’s, two researchers named Mattison and McWhirter studied 156 male couples over a period of five years. Out of all these couples, only seven claimed that they were sexually monogamous while they were together, and none of these were long-term. Of the couples who stayed together more than 5 years, none were monogamous.

And this isn’t biased research from a religious or conservative group. Mattison and McWhirter were openly gay men.

It's interesting that a young man would have the gumption to look up a study that was published in 1984.  It's also interesting that "Mike" referred to the Mattison and McWhirter study without mentioning the part in which they said their work couldn't be considered an adequate representation of all gay couples:

“We always have been very careful to explain that the very nature of our research sample, its size (156 couples), its narrow geographic location, and the natural selectiveness of the participants prevents the findings from being applicable and generalizable to the entire gay male community.”

More recently, in 2003 a Canadian professor named Barry Adam released a study about gay men. He reported that only 25% of the men he interviewed claimed to have been in monogamous relationships at some point, and these were mostly younger men in relationships shorter than three years.

Of course "Mike" omits several things about the study. According to a Washington Blade article:


Adam recruited the men for his study through ads in gay publications and leaflets distributed at gay organizations and bars in Ontario. To qualify for the study, the men had to be in a relationship for at least a year. The relationship of one couple spanned 23 years.

The sample of 70 men - including both members of 10 couples and 50 other men - included 41 Caucasians, 16 Asians, five men from African and Caribbean descent, seven Latinos and one Canadian Aboriginal.


Adam's research team did not calculate the average length of non-monogamous relationships. It was not clear if partners became non-monogamous over time, or if they agreed to be in an open relationship from the beginning, Adam said.

The study sample was diverse but may not be representative of gay men as a whole, because "genuinely random samples of gay and bisexual men are virtually unachievable," Adam said.

I doubt that "Mike" is who he says he is. Most likely, he is a Day of Truth staffer dressing up distorted studies as a "personal story of freedom from homosexuality."

I'm not one for political correctness or falsely making cries of racism, so I will let you all be the judge of this comment by Peter LaBarbera responding to the email I sent him with this morning's post:

Yes Peter is aware of the fact that I am a black man but I'm not offended (although I am acting that way in the email exchange with LaBarbera in order to goad more comments from him. He is so easy to provoke.) Granted, it may seem juvenile, but remember THIS is the man who the so-called Christian publication One News Now goes to when it needs a comment for one of its biased anti-gay articles and he professes to be a leader in the anti-gay movement. So it is good for folks to see the full flow of LaBarbera's vapid mindset. This is the man that some folks actually thinks is an "expert" on the gay community. Other than being a right-wing circus clown, LaBarbera again shows why he perfectly represents the emptiness of the religious right.

Okay enough for silly indulgences. On to news briefs:

Video: It's an A & B conversation, they just wanna C everyone outta homosexuality - It's almost April which means it's time for that phony Day of Truth.

Maryland: Impeachment Threat Over Gay Marriage - This is so stupid.

Posted by BlackTsunami at 8:39 AM 2 comments: I usually check out Peter LaBarbera's anti-gay Americans for Truth web page for either a good laugh or information for a good post. LaBarbera's eager plunges into homophobia has given me plenty to write about over the years.- so much so that I venture to say that LaBarbera's naked stridency has done more to help the lgbt community demonstrate the hatred and utter hypocrisy of religious right groups and their supporters.

But today, I am noticing a tone on his page which I haven't seen before - fear.

Ever since the Southern Poverty Law Center designated his web page as a hate site (a long time overdue), LaBarbera has been on what be called as a psychological bender, devoting six posts over the past week to pleading his case.

It's unbelievable to contemplate but the SPLC has actually taken LaBarbera's mind off of gay sex, at least for a while.

From challenging the SPLC's Mark Potok to a debate to whining about how SPLC is ignoring gay blogs which he claims preach hatred (and he lists his favorite whipping boys - Joe.My.God. and Truth Wins Out), LaBarbera seems to be disturbed (more than usual that is) that his "Christian assessment" of the lgbt community is receiving so much criticism.

He has even taken to posting comments from pro-gay blogs in an attempt to smear the blogs in general. Evan Hurst of Truth Wins Out was the unfortunate victim of such a smear.

Then again, I take that back. If I know Evan, the only unfortunate party was LaBarbera for daring to take him on.

It amazes me that a man who has made his life's work the demonizing of an innocent group of people can suddenly whine that he is the victim when his attempts garner him the attention he truly deserves.

Amazing, yes but oh so fun to watch.

The fact of the matter is no matter how he tries to disguise his homophobia as basic Christian beliefs, no one is buying LaBarbera's whines (except for the truly ignorant - yes that means you, Linda Harvey). SPLC's designation  and his labored defenses of his position represents another depth which LaBarbera has sunken in his campaign to vilify the lgbt community.

And it represents the plain sad fact (well not so sad to some of us) that while LaBarbera has long since lost all credibility as an anti-gay activist, he is gaining credibility for a new designation - circus clown.

10 reasons why Americans for Truth is a hate site