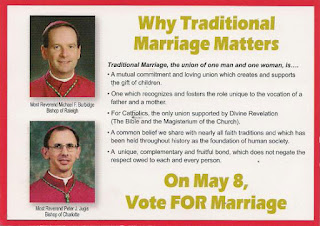 Amongst members of the lgbtq community and our supporters, there have been whispering suspicions that one of the reasons why the National Organization for Marriage fights tooth-and-nail to keep its donor lists secret is because perhaps the Catholic Church leadership itself may be involved in with NOM's efforts to hinder marriage equality at a level which would raise some serious questions regarding ethics and the legality of a  religious organization interjecting itself into political battles.

According to the Charlotte News & Observer:

The Catholic Dioceses of North Carolina have contributed $100,000 to the effort to put a ban on gay marriage and civil unions in the state constitution. And now the Raleigh Diocese has sent a mailer titled "Why Traditional Marriage Matters" that is prompting a complaint to the N.C. State Board of Elections.

Carol Love, the former executive director of Common Cause North Carolina, a liberal-advocacy group, questions whether the group filed the proper campaign paperwork for the mailer and filed a complaint. A staffer at the elections board told her the no records reflected the political expenditure. "My complaint is that the Catholic Diocese of Raleigh does not seem to be adhering to all state, and possibly federal, election and lobby laws, including reporting requirements, and request that the Board of Elections investigate this matter," Love wrote.

Just how plugged-in to the Catholic hierarchy is NOM?

Posted by BlackTsunami at 1:36 PM 2 comments: