It's not enough to call them bigots 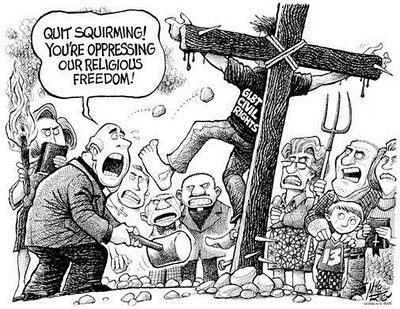 A repost from last year

However we really should do more than simply declare them bigots.  Members of the right tend to embrace that definition, using it to play the martyr and lie about about how they are being unfairly attacked for simply speaking about their "personally held Christian beliefs."

The lgbt community needs to follow the advice of high school math teachers and "show our work" in proving what needs to be known about these so-called pro-family groups, i.e. that they lie intentionally to create a phony picture of the lgbt community. So I have compiled a pattern of religious right deception which can be broken down to six techniques:

1. Using nonrepresentative or out-of-date studies to make generalizations, or distorting legitimate studies to give misleading conclusions

Example 1 - Religious right talking point: According to the book Homosexualities: A Study of Diversity Among Men and Women, 43 percent of white male homosexuals had sex with 500 or more partners, with 28 percent having 1,000 or more sexual partners. Therefore gays have no concept of mongamy and certainly can't be trusted to raise children.

Truth - Homosexualities was a book written in 1978 that only looked a certain portion of the lgbt population (gay men in the city of San Francisco). It also did not look at same-sex households. In addition, the authors of Homosexualities (Alan Bell and Martin Weinberg) said that their book should not be used to generalize about all gays in general:


“. . . given the variety of circumstances which discourage homosexuals from participating in research studies, it is unlikely that any investigator will ever be in a position to say that this or that is true of a given percentage of all homosexuals.”

Example 2 - Religious right talking point: Same sex marriage and gay adoption are bad ideas because research shows that the best places to raise children are in homes with a mother and a father.