There has been a lot of speculation on whether or not Mike Huckabee will run for president. I think he will and if he does, the lgbt community had better do what we can to keep him from getting elected.

And I say that based upon this conference call he had with other anti-gay leaders (courtesy of Right Wing Watch). On this call, you can practically start a drinking game with the lies and paranoid delusions Huckabee throws out about the lgbt community and how we will attempt to outlaw Christianity and force pastors to marry gay couples.

That's the one thing I hate about people like Huckabee. Not only do they think that their version of Christianity is the only one which counts, they don't even hold true to it because of the outrageous lies they tell.

Editor's note  - According to Right Wing Watch, because of apparent technical difficulties with the conference call, there are beeping noises throughout the call signifying participants dialing in.

'Approval of marriage equality at an all-time high, but . . .' & other Thursday midday news briefs 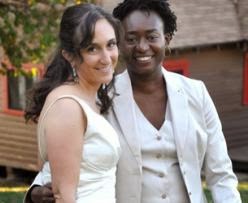 Breaking: American Approval Of Same-Sex Marriage Breaks All-Time Record - Excellent news, but there are some problems on the horizon.

GOP lawmaker introduces bill to strip federal courts of power to rule on marriage equality - Though this bill doesn't have a chance in hell of passing, it is still problem 2 because of the following news brief. . .

Rep. Steve King Introduces Court-Stripping Bill Written By Radical Anti-Gay Activists - This is why we need to take all prominent members of the anti-gay right seriously. No matter how crazy they are (and we got some crazy ones), if they can get their influence in Congress, that's another fight we have to deal with, regardless of whether or not we win said fight.

How a transgender teen got South Carolina to change its license photo policy - WONDERFUL!!!

STUDY: LGBT People of Color at Risk of Lifelong Poverty - We got a problem and part of it stems from the lack of positive reinforcement and attention lgbts people of color receive from society.

Cordileone won’t be back at this year’s anti-gay-marriage march - This is a BIG deal. NOM just lost a high-profile speaker for their Saturday march.

Photo of lesbian couple taken from (the generous and always helpful) Right Wing Watch.
Posted by BlackTsunami at 9:01 AM No comments: