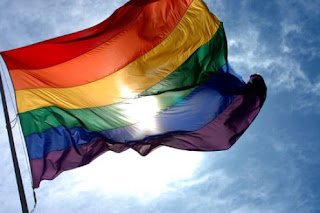 Cub Scouts ban 8-year-old transgendered boy after other kids’ parents complain - This is a mess. Textbook case of children being harmed by parental freakout fueled by "those homosexuals and transgenders want your children" nonsense.


A Look Back At 2016’s Best, Worst And Ugliest Queer Political Moments - It was a wild, horrible, and sometimes magical year. The fight continues.

The Dangers of the Gay Conservative Movement - No offense, but when a gay conservative can take his or her own party, i.e. the GOP, to task and win, then I will care about them. They throw mess in the lgbt tent. And let's be honest. There is a serious touch of white paternalism involved.

On losing George Michael in 2016, a year in which toxic masculinity reigned - Thoughtful essay.
Posted by BlackTsunami at 9:17 AM No comments:


With the incoming Trump Administration, religious right and so-called traditional values groups will be in the best position they have probably ever been to create policy for the country. And a large part of that policy will be to undermine lgbt equality under the guise of Christianity and religious freedom. According to Right Wing Watch, the Family Research Council is practically chomping at the bit to get things started:

Thrilled by Donald Trump’s election, the Family Research Council has laid out an ambitious agenda for the president-elect.


Media Matters also points out that FRC has played a pivotal part in the direction of the incoming Trump Administration and the GOP in general:

FRC president Tony Perkins played a pivotal role in Trump’s campaign and helped shape the Republican Party platform. During the Republican National Convention, he was successful in adding support for “ex-gay” conversion therapy, a discredited, harmful practice that falsely claims to change a person’s sexual orientation or gender identity, and has been denounced by every major medical organization. Since the election, some of Perkins’ FRC affiliates have won spots in Trump’s transition team. Wired’s Emma Ellis spotlighted the hate group’s growing influence on the Trump administration, which includes the following members affiliated with FRC:

Media Matters also says that coupled with the fake news generated from sites like Breitbart, the Daily Caller, etc, the future of the lgbt equality could be irrevocably in jeopardy.

Well that could be true, if we wait for these things to happen without even so much as a little pushback. What I am about to say is coming from a place of love, not spite. Ever since Trump was elected, members of the lgbt community have been cowering in a corner waiting for parental punishment.  Of course things are going to get ugly. So what. Aren't we used to it yet?  There is no equality without backlash and there is no such thing as victory without adversity.

And when faced with an old enemy, why is it so difficult for us to call them out? You know where I stand on this situation. It's the same place I've always stood for 10 years:

When in doubt, call those bastards out.

The Family Research Council and the religious right in general have too much of a paper trail of lies, distortions, and junk science to get away with being designated as "Christian groups" who "fight for values."

What everyone seems to be forgetting is that with this role in the Trump Administration, they've made themselves a target for extreme scrutiny. And it is to the advantage of the lgbt community to tell folks where to look.

Like here for example. The copy of my booklet, How They See Us: Unmasking the War on Gay America, on adobe acrobat.(where the graphics in this post came from). It's free and it's a start.