What about the gay members of Eddie Long's church? 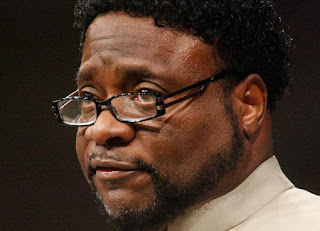 The situation with Eddie Long and his wife continues to get interesting. Long is the minister of the New Birth Missionary Baptist Church in GA embroiled in a scandal which led to him paying off four young men who claimed that he sexually coerced them. Yesterday, Long's wife said she plans to file for divorce. She then retracted the statement.

Now, it has been announced that the plans for divorce is on again.

It's a sad situation regarding hypocrisy in the black church which no one wants to address. The black church will knowingly embrace gang members, drug dealers, people who have sex outside marriage while attending church. But an upstanding openly gay or lesbian is enemy number one to it. To this day, there is have been no adequate discussions on this conundrum.

Long's scandal is also a case of possible kismet. He benefited immensely from his very public stances - including a huge rally - against marriage equality, even to the point of conveniently getting some of that "faith-based initiative money" doled out by the Bush Administration.

But now Long is losing more than just money. He has lost his name, his reputation, and standing.

However, there are victims in this situation in which no one is talking about - the African-American gay and lesbians members of Long's church and other churches like his.

Let's focus on them for a change.

The following interview is from when the scandal began with a gay member of Long's church. It's hard to watch, particularly when he states the reason why many gay men still attend the church.

His words underscore the fact that the reason why black gays and lesbians flock to negative environments like Long's church because it's difficult for them to find any support or positive reinforcement in regards to their sexual orientation from any other place - even those which are supposed to be "gay-friendly."

The interview with this young man should send a message to the lgbtq community at large that we need to do more to embrace our all of own, even those who don't fit the stereotypical "white-bread" supposed normal definition of being gay in America:

Eddie Long wants his money back

Posted by BlackTsunami at 8:41 AM 2 comments: