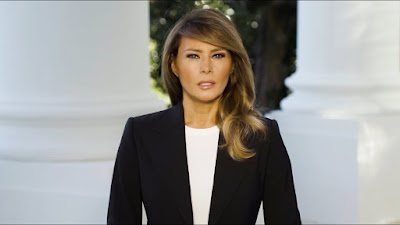 First Lady Melania Trump filmed a video for the Log Cabin Republicans — an LGBTQ+ GOP organization that endorsed Donald Trump's reelection — claiming her husband is pro-gay, even though his policies have harmed gay people and the entire LGBTQ+ community.
The video begins with the first lady claiming her husband is an "outsider" who wants all Americans to prosper, though he has staked his entire political career on white grievance and overt racism. Melania Trump then reverted to the role her family often falls back on: victim.
She claimed Donald Trump earned the ire of powerful political insiders because he challenged the status quo. "I was shocked to discover that some of these powerful people have tried to paint my husband as antigay or against equality," Trump says. "Nothing could be further from the truth."
. . . Melania Trump also touts her husband's appointment of Richard Grenell as ambassador to Germany and, later, acting national security advisor. Grenell resigned in June and has previously been accused of xenophobia and misogny. Grenell defended Donald Trump tear-gassing peaceful protesters this summer so he could have a photo op in front of a church.
Melania Trump also claims that "as the leader of the Republican Party and president of the United States, Donald has been clear that gays and lesbians have been treated as he has always treated them, equally."

You can go to the link if you want to see the ad because I refuse to soil my blog page with that shit. It just pisses me off "to the highest levels of pissivity" for a number of reasons.
From having anti-LGBTQ spokespeople such as Roger Severino in his administration waging war on our health to his ban on transgender people serving in the military via inaccurate information to his administration unsuccessfully arguing in front of the Supreme Court that it was perfectly legal to fire people for being LGBTQ, Trump has waged a silent but debilitating and depressing war against LGBTQ people.
And even after all of that, here comes his wife and some fools who really should - and probably do - know better attempting to convince us that he's our best friend.
At least with Franklin Graham, the Family Research Council, the Alliance Defending Freedom, and the rest of the anti-LGBTQ industry, we know where we stand. We don't like them and they don't like us. There is something morbidly wonderful about having someone being upfront about opposing you.
It's entirely different when someone smiles in your face while trying to convince you that they are your best friend even after they've publicly, unashamedly, and repeatedly worked to undermine your rights and safety. It's even worse when they know that you know that they are lying but will lie to you anyway in hopes that you are naive enough to believe them.
It takes a certain type of evil to have that sort of temerity. A rotten, fetid, putrid, lack of self-respect type of evil.  It's the kind of evil which ranks down there with a group betraying their own people status and power. WHICH brings me to Richard Grenell and the Log Cabin Republicans.
I can't say what I want when it comes to that bunch because it involves - at the very least - figuratively jumping down throats and stomping livers. But I suggest that if this nonsense angers you - and it should - then go and vote in order to prove that you won't fall for this bullshit.
And if you need anymore incentive and a list to show to those believing this mess, check out this wonderful article -  No, Trump Is Not a Friend to LGBTQ+ People. Here's the Evidence
Posted by BlackTsunami at 5:01 PM 4 comments:

Advocates fear Barrett will strip away gay rights. It could begin next week. - Next week promises to be interesting for a multitude of reasons. And hopefully no one will be too distracted to notice this one. We've worried about how Barrett will look at LGBTQ equality. The first test is will she say that LGBTQ taxpayers have to give up our money to entities who want to discriminate against us?
Obama protections the Trump administration has rescinded (or hopes to) - For those folks in our community who delude themselves when it comes to Trump's "support" of us.
Dead Marijuana Candidate Paid by GOP to Defeat Lesbian Politician - Talk about your drama . . .
Top football referee defiantly comes out as gay after player used vile homophobic slur in the middle of a match - Good for him!
Posted by BlackTsunami at 9:06 AM No comments: