How homophobic is the American Family Association's fake news site One News Now? In article about lgbts supposedly "recruiting" children (cue the spooky music), readers were invited to vote in the following poll: 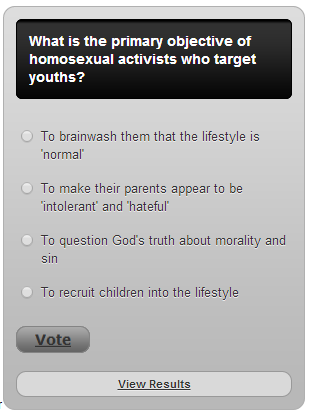 I think it's safe to say that lgbts won't turn out the winners in this vote.

'Gay couple kicked out of restaurant, told that 'f@!s are not served' & other Thursday midday news briefs

Texas Restaurant Bans Gay Couple Because ‘We Do Not Like Fags’ - You would be surprised that this sort of thing may be perfectly legal. If it blows up, count on groups like the Family Research Council to stand behind this restaurant, even to the point of defending the use of the anti-gay slur.

Family Research Council Prays To Stop LGBT Pride Month - So apparently FRC is having a big event during LGBT Pride Month and are all upset about it. I don't suppose a collaborative event is in the question.

Urgent Stop Ugandan Foreign Minister from Becoming President of UN General Assembly - Anyone leader from this awful country which freely persecutes lgbt has NO business in any leadership position anywhere.
Posted by BlackTsunami at 8:58 AM No comments:

After a long, contentious meeting, the city of Houston, TX passed an ordinance protecting the rights of lgbts.

From the Houston Chronicle:

After nearly nine hours of discussion, punctuated by opponents chanting outside City Hall and by emotional supporters' personal stories of discrimination, the Houston City Council on Wednesday passed an ordinance extending equal rights protections to gay and transgender residents.

Public dissension has persisted for weeks, but the final vote was 11-6, a count that matched guesses made months ago when Mayor Annise Parker - the first openly gay mayor of a major U.S. city - said she planned to bring the measure forward.

The approval was greeted with applause from the audience, largely full of supporters by the time of the vote, and chants of "HERO," for the Houston Equal Rights Ordinance. Opponents vow to gather the signatures needed to trigger a referendum to repeal the law this November, and others say they plan to seek recall elections against some council members who supported the measure.

. . . The measure bans discrimination based not just on sexual orientation and gender identity but also, as federal laws do, sex, race, color, ethnicity, national origin, age, religion, disability, pregnancy and genetic information, as well as family, marital or military status. The ordinance applies to businesses that serve the public, private employers, housing, city employment and city contracting. Religious institutions are exempt. Violators could be fined up to $5,000.


The ordinance vote gained nationwide attention and even commentary from groups such as the anti-gay Family Research Council as opponents threw out the standard memes of "bathroom bills" and "religious liberty," such as:

but those supporting the ordinance were firm and had their facts together:

Still, this issue is far from over. My guess is that opponents of the bill will continue to be stirred on by their homophobia, fears, and outside groups such as the Family Research Council. However, I also believe that Mayor Parker and the supporters of the ordinance are going to dig in and give them one hell of a fight.
Posted by BlackTsunami at 4:58 AM 1 comment: