It never ceases to amaze me how the anti-gay right will blatantly lie.

According to a recent Family Research Council email:

No wonder people like Cokie Roberts don't think same-sex "marriage" has "tangible, identifiable victims." The victims are being ordered not to talk about it! That's the latest twist in the long and bitter suit against Aaron and Melissa Klein, the young Christian bakers who turned down a lesbian wedding cake order in Oregon -- and have been paying for it ever since.

As prepared as the Kleins were to hear their $135,000 fine had been finalized, nothing could have prepared them for the Bureau of Labor's second punishment: forced silence. Labor Commissioner Brad Avakian decided to put his own stamp on the punishment by ordering the parents of five "to cease and desist from publishing, circulating, issuing or displaying, or causing to be published... any communication to the effect that any of the accommodations... will be refused, withheld, or denied to..."


His order made the Kleins speechless all right -- but not for long. Once the shock wore off, Aaron and Melissa made it quite clear that they wouldn't stop speaking out about their case, no matter what the government threatened. "We will not give up this fight," Aaron wrote on their Facebook page, "and we will not be silenced."


For those who are not aware of the situation, Aaron and Melissa Klein owns a bakery in Gresham, Oregon and they refused to bake a cake for a gay couple in 2013. In accordance to Oregon's non-discrimination law, they are now ordered to pay a $135,000 fine because of the mental and emotional stress their action caused the couple..

The Kleins claimed that baking a cake for the couple would have been against their religious beliefs and as such have become a cause celebre for the idea of "religious liberty," i.e. the belief that businesses can use religious beliefs as an excuse to deny services.

This supposed idea of a gag order only adds to the hysteria propagated by organizations, such as the Family Research Council,  as well as other groups and personalities on the right as they attempt to push the notion that marriage equality and lgbt equality in general will lead to the so-called  persecution of those who believe that homosexuality is a sin.

But the claim about a gag order is a lie.

It will be a couple of years before the anti-gay right is over our marriage equality victory. Until then, expect to hear stuff like the following from folks like anti-gay activist Janet Porter (creator of a recent and extremely outlandish homophobic documentary):

Are you upset about what the Supreme Court did to marriage? Now, there’s something you can do about it. We can ask the court to rehear the case because two justices violated the federal law which states, “Any justice… of the United States shall disqualify himself in any proceeding in which his impartiality might reasonably be questioned.” Justices Kagan and Ginsburg both officiated homosexual so-called weddings, which disqualifies them from ruling on the case. Ask Ohio Attorney General Mike DeWine to file a motion for rehearing the marriage case . . .  because it was illegally rendered. Ask him to call for a motion for rehearing the case.


The belief that Justices Kagan and Ginsburg should disqualify themselves because they officiated gay weddings is a cry which has been floating out there in the extreme right-wing bilgewater  for a while now without much momentum (even with an assist from Fox News).

I don't expect Porter's pathetic cry will amount to much. She would probably object to me calling her an anti-gay activist. Porter would like to refer to herself as a "pro-family" "Christian"  activist. However, based on the video below of her five years ago praying to God for total media control (I am not making this up),  one wonders if her type of Christian "activism" is actually helping the religion:

Posted by BlackTsunami at 3:30 PM No comments: 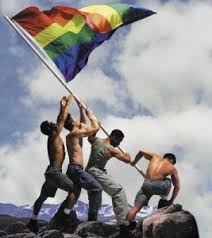 Gallery: Minnesota's first same-sex couple known to apply for a marriage license are still married today - Sort of puts a damper on the "gays don't have long relationships" lie, don't it?

AND because you know you love it, a potpourri of crazy over marriage equality decision:


Dobson: 'I Fear That God's Judgment Will Befall This Once Great Nation' Because Of Gay Marriage Ruling

Staver: Gay Marriage Ruling Has 'Brought Sin And Judgment Upon ... The Court And On The Country'
Fischer: 'The Day Is Coming When It Will Be Against The Law For Christians To Hold Public Office'


The National Organization for Marriage and its president, Brian Brown, had a special message for the Fourth of July which demonstrated that the organization is still angry and defiant about the recent SCOTUS decision on marriage equality:

On this Independence Day, we celebrate: The men and woman who sacrificed everything for Liberty. Those who founded this nation upon the radical notion that our rights come not from a benevolent government, but are unalienable, granted us by the Creator. Who recognize that the Creator endowed us with the institution of marriage as the union of one man and one woman. And who understand that marriage has served a great public good, bringing men and women together to provide the ideal environment for any children born of their union. And we are grateful for the tens of millions of Americans who, despite the grave error of our US Supreme Court in presuming that they have the power to redefine marriage, continue to revere the truth of marriage as serving a profound public good for families, children and society itself. May God continue to bless our nation and remind us that his plan for marriage is perfect.


If there's one thing I can't stand, it's a sore loser.
Posted by BlackTsunami at 5:11 AM 1 comment: