Determined to keep the possibility open that all of their little right-wing evangelical fantasies (anti-lgbt religious liberty laws, curtailing of transgender rights, defunding Planned Parenthood, conservative justices on SCOTUS, elimination of the Johnson Amendment) would become realities, some religious right groups and organizations are backing Trump regardless of how off the deep end he goes with his statements and assertions

For example, there is his latest nonsense that the former president, Barack Obama, wiretapped his phones at Trump Tower before the election. Trump didn't offer any proof and federal officials, such as FBI director James Comey have said it didn't happen. Meanwhile, Trump's team has been scrambling to either back him up or lessen the backlash while credibility has taken another beating, particularly in the press.

Nevertheless, the folks at the anti-lgbt hate group American Family Association's fake news site, One News Now, is backing him up with a comically awful article, A crazy accusation that might not be so crazy.

To make matters even more pathetic, One News Now is taking a poll which doesn't even offer any genuine questions: 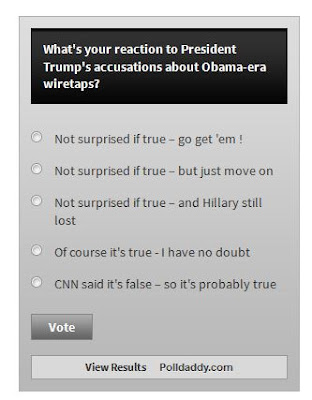 Lies about wiretapping told in the name of God are still lies. But I guess AFA doesn't care as long as it keeps Trump's so-called Christian evangelical supporters from becoming sensibly demoralized.
Posted by BlackTsunami at 4:43 PM No comments:

While those who can be considered (if such a term is credible) as "mainstream anti-lgbt groups," such as the Family Research Council, are quiet on Trump's claim of wiretapping by Obama, the more fringey, one fry short of a happy sect is pulling out all of the stops to spin general conspiracy theories. That is, at least according to posts by People for the American Way's Right Wing Watch. I just think  it's ironic that they haven't pointed the finger at us for now:

Rick Joyner: Obama Holdovers Are Committing Treason Against Trump To Cover Up Their Crimes

Supreme Court Ducks Big Transgender Rights Case — Thanks To Trump Administration - By NO means is this over.

Trans women of color are missing from the conversation about transphobia - Seven transgender women of color have been murdered thus far in 2017. What the hell .  .

This Stunning Photo Series Is Highlighting The Experiences Of LGBT African Immigrants - Stunning is the right word for this series. It's

Posted by BlackTsunami at 11:27 AM No comments:

Franklin Graham spews homophobic foolishness over 'Beauty and the Beast'


The news that there was will be a gay character in Disney's upcoming live action depiction of 'Beauty and the Beast' has gotten the "usual suspects" up in arms with their Helen Lovejoyish cries of "won't someone think of the children."

And none of them seem to be louder than evangelist Franklin Graham.

In a Facebook post shared this week, Graham wrote that the company is “trying to push the LGBT agenda into the hearts and minds of your children — watch out!” Then, acknowledging that “Disney has the right to make their cartoons” because “it’s a free country,” the evangelist went on to state, “as Christians we also have the right not to support their company. I hope Christians everywhere will say no to Disney.”


So it's the old "gays want your children" fear tactic. Granted, it's several steps above the Anita Bryant cry of how we supposedly want to "recruit children to refreshen our ranks," but the same meaning still applies. The Huffington Post also added this about Graham's tendency to be public about certain issues:

Graham has previously made his thoughts on other non– straight, white, Christian groups clear with comments about President Trump’s ban on Syrian immigrants (“not a Bible issue”), Islam (“evil”) . . .


It's unfortunate that Graham's interpretation of Christianity includes attacking a different religion with lies and opposing the tenet Jesus put forth in his parable of The Good Samaritan while railing against a fairy tale simply because a depiction of it includes a gay character. One wonders how he feels about 'Snow White and the Seven Dwarfs,' i.e a teenage girl living in the forest with seven unmarried men.

I honestly wasn't planning to see 'Beauty and the Beast,' but thanks to Graham, I'll probably go to see it. Twice.
Posted by BlackTsunami at 6:57 AM No comments: