Want to know about black gay men? Hush and listen to what a black gay man is telling you

This video is almost a year old but the knowledge it contains is evergreen. Not only does it make a point about the specificity of growing up as a black gay man, but what's happening here is a general lesson we should take to heart.

Let me put it another way. Whenever that odious sob Bill O'Reilly did a show on racial issues, I knew what to expect from him. He would either not have any African-Americans on that specific show or when he did, he always talked over them or yelled at them. He didn't care to listen to what they had to say because he was too busy creating the narrative, i.e. in this case it was the stupid generalization that black people blame whites for all of our problems. That was the thing which always pissed me off. He NEVER listened. He was too busy barking at black people or about black people and telling us what our problem was - something he never knew - that he didn't care what we had to say.

So basically what I am saying is that while this video is about listening to black gay men talk about their lives, its message is a general one. If you want to know what we think, don't tell us what we think. Listen to what we have to say. And that message goes for wanting to know more about  transgender, bisexual, lesbian, and other communities be they racial, religious, gender-related, etc.

Sometimes when you hush your mouth and listen to people, you learn so  much more than you would if you chose to argue with them about their lives.
Posted by BlackTsunami at 4:30 PM No comments: 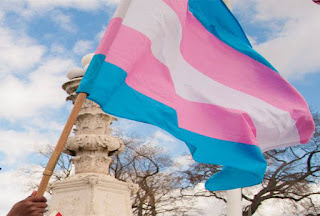 Trump Administration Abandons bid to bar transgender recruits from US military - This took place on December 30. As of yesterday, transgender men and women can sign up. Trump officially loses in his attempt to ban trans troops. Knowing his religious right allies though, keep one eye open. They are always up to something sneaky.

Munroe Bergdorf slams the media for ‘screwing up’ transgender kids - I am not familiar with this woman, but I already love her!