Yesterday, American Family Radio’s Sandy Rios spoke to Ex-Gay Pride Month organizer Christopher Doyle about today’s ex-gay lobby day on Capitol Hill. Doyle, who was organizing the since-canceled Ex-Gay Pride banquet at the Family Research Council, complained in an interview with the Christian Post that “un-American” LGBT rights advocates have “shut us out,” explaining that “because of all this homo-fascism and indoctrination in the media, ex-gays aren’t given a fair shake.”

Rios confidently predicted that “thousands of ex-gays are descending” on Washington for a press conference planned for today at the Supreme Court. She lamented that when she led Concerned Women for America the media refused to hear “our ex-gay friends” because it “undermined the whole effort of the homosexual lobby.”


If I was Rios, I wouldn't play the lottery any time soon. Fewer than 10 showed up: 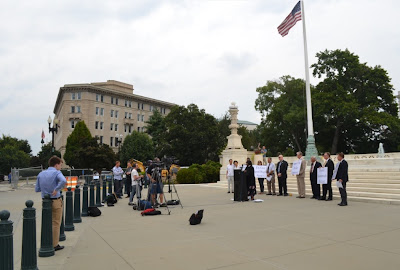 You can see other pictures of this disaster at Right-Wing Watch. Also, enjoy this video from the event. It's so pitiful that it becomes hilarious.

Posted by BlackTsunami at 2:52 PM 7 comments:

USA Today Publishes Op-Ed By Ex-Gay Therapist Who Claims ‘Hundreds Were Successful’ - So the USA Today is now publishing fairy tales. How interesting.

Marriage Equality Lawsuits After DOMA Arise In South, Midwest, As Gay Rights Groups Urge Caution - With Supreme Court victories over DOMA and Prop 8, same-sex couples are filing lawsuits in several places to get marriage equality in their states. But is it the right move. An excellent piece looks at this question.

The video snippet NOM doesn't want you to remember

If you will look on the blog of the National Organization for Marriage, you will see that the organization is making a pivot in it's talking points regarding marriage equality. It's not about "protecting the children" anymore. Rather it's about supposedly "protecting religious liberty."

Apparently those of us who support marriage equality are running roughshod over the freedoms of those who don't support it. NOM's blog posts are endless whinings about "lawless government officials" and horror stories about pastors being forced to marry couples.

So it would seem that the "oh won't someone please think of the children" talking point has run its course for NOM. But let's not totally discard the talking point. Remember the following snippet from Question One, the documentary about the 2009 vote to repeal marriage equality in Maine when the head of campaign to repeal, Marc Mutty, actually refuted NOM's talking point about marriage equality and children:

Let's not forget that nor allow anyone else to forget either.

Posted by BlackTsunami at 4:45 AM 2 comments: