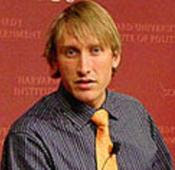 I noticed that the American Family Association's One News Now has not said a word about George Rekers. However the phony news services did publish a seemingly defiant piece via "ex-gay" Michael Glatze.

For the benefit of those who are not aware, Glatze was the founder of a gay magazine and an activist who, after a health scare which turned out to be anemia, decided that he was no longer gay. Now he attacks the lgbt sexual orientation with as much fervor as he claims to have embraced it. Since Glatze's "change," he has been wandering through life doing strange things, such as briefly joining the Mormon church or attacking President Obama's racial heritage.

Recently, he claimed to no longer be a "spokesman" for the ex-gay community.

I guess his mind changes as quickly as his sexual orientation. There is no need to read his recent piece, Healing from Homosexuality. If you have heard Peter LaBarbera, Matt Barber, or Andrea Lafferty speak, then you know what this piece is all about. 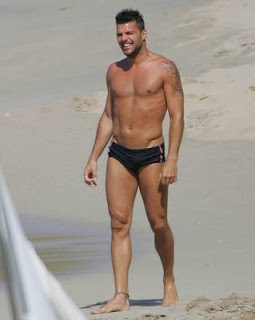 But what caught my attention when looking for that piece was the one Glatze had written earlier addressing the recent coming out of singing sensation, Ricky Martin  in his piece, To Ricky with love: You can resist:

Our increasingly perverted culture is engaging in an all-out war on human sexuality, with the idolization of the male body one of its bastions and the twisting of normal heterosexuality into active homosexuality as its main goal. If masculinity can be undermined, the people will be without a powerful spine - and charismatic leaders with nothing but power and control in mind can assume that power and control.

Ricky Martin, like many of us, had the pressure of a life of fame and the life of being successful on account of his sex appeal and physical appearance. And, like all people who suffer this temptation, the "gifts" of success can seem to outweigh the gifts of humility and denial of that success - in pursuit of higher principles. The pressure is immense.

. . .I tell people all the time that the seduction of homosexuality is so powerful - especially when supported by charismatic presidents and powerful lobbying groups - that it can seem so much easier just to succumb, rather than fight. But that fight is for your very soul. This goes for everybody reading this, whether you identify as "gay" or "straight," "Christian" or not - this is a battle for your soul.

When the homosexual temptation arises in a human's experience, it is always possible to avoid it - and push through. There are many good Christian churches there to help, many good organizations out there with powerful, good resources (NARTH.org is one of my favorites) and many loving individuals who can offer their personal stories to inspire and edify.

What's so hilarious about Glatze's commentary - other than the NARTH mention in light of the Rekers scandal (Glatze's piece came out before Rekers's desire to have his "junk,"  I mean luggage handled became public)  - is how Glatze makes it sound like Martin is in the lure of something sinister and evil.

The following is Martin's statement after coming out. Does it sound like something sinister or evil?:


This is just what I need, especially now that I am the father of two beautiful boys that are so full of light and who with their outlook teach me new things every day," Martin wrote. "These years in silence and reflection made me stronger and reminded me that acceptance has to come from within and that this kind of truth gives me the power to conquer emotions I didn't even know existed."

Personally I could care less about Glatze. Whatever he decides to do for himself is his decision and it is something he has to live with. And it is his right to live how he wants and to believe what he wants.

But lines must be drawn when he tries to push that belief on others. His audacity in this "personal note" to Ricky Martin, as well as that silly piece he wrote recently in One News Now is sad.

How dare he makes such assumptions about people's lives.  There are many of us lgbts who love our sexual orientation. A lot of us, myself included, feel like it's wrong not to express our homosexuality because it is a gift from God.

What makes our voices and opinions any less important than Glatze's?

Finally far be it from me to attack someone's personal decisions in life but I think something highly Freudian is going on here. Why Ricky Martin?

If you want to impress me, Michael, why don't you try to convert someone older and more difficult, such as  Nathan Lane or Rip Taylor?

Shouldn't you deeply care about their sexuality too, even if they don't swing their hips like Martin?

Posted by BlackTsunami at 4:15 PM 4 comments: Links to this post

Republican gubernatorial candidates in trouble over religious right ties - thus proving the old adage of "when you lie down with dogs, you end up with fleas:

Thanks to gay couples, DC marriage licenses may hit new record - Not that I'm gloating or anything.

Minnesota Governor Tim Pawlenty Vetoes “Final Wishes” Bill for Same-Sex Couples - I called it last week. Sorry Pawlenty but if you think you are going to the White House on the backs of the lgbt community, think again.

Posted by BlackTsunami at 9:09 AM No comments: Links to this post

The folks at InfoMania's take on the Wall Street Journal and that picture of Supreme Court nominee Elena Kagan playing softball.

Why did they run that picture anyway?

Conversion Therapy - a video with George Rekers in mind

Advice to closeted politicans - How to keep from being exposed

Why the phrase 'No Homo' is highly needed

Why gay marriage is 'wrong'