Unless you have been in suspended animation, you know that GOP presidential candidate Donald Trump took valuable time away from campaigning to engage in a war of words with Khizr Khan, the Gold Star Muslim father of  U.S. Army Capt. Humayun Khan who was killed in 2004 in Iraq. Khan totally shamed Trump in a speech during last week's DNC convention because of Trump's constant demonization of the Muslim community.

Instead of allowing the incident to pass with a generic comment accepting Khan's opinion, Trump has allowed his ego to dictate a fruitless war of words against Khan and his family, thereby demonstrating himself to be an absolute monster with no impulse control.

And it gets worse.

Trump's team and supporters are smearing Khan - and his late son - as terrorists. Naturally, this is causing Trump to be hit with criticism from all sides, as well he should.

Thanks to The Daily Beast, we now know where Trump's team got this smear:

At 10:40 on Sunday evening, a long-time adviser to Donald Trump tweeted that Khizr Khan—the gold star father who’s emerged as one of the candidate’s most effective critics—was an “agent” of an Islamist cabal. It’s an opinion, less than a day later, that’s become an article of faith to many in Trumpworld. It’s also the product of the fevered imagination of Theodore “Shoebat,” the pseudonymous conspiracy theorist and Islamophobe who has made a career of spreading nonsense. That is, when he’s not calling himself a “proud fascist.” His dad and fellow conspiracy-monger, Walid, isn’t much better. He swears that Zika is a punishment from God, and likens homosexuality to cannibalism.


Theodore Shoebat is known to many of us watchdogs of anti-lgbt propaganda. His statements are so vile they have to been seen and heard to be believed.

The supporters of Mississippi's anti-lgbt law suffered a serious blow in court this afternoon.

The federal judge in Mississippi who halted enforcement of the state’s new anti-LGBT religious exemption law declined on Monday to put his ruling on hold while the state appeals the ruling.

Mississippi Gov. Phil Bryant had asked U.S. District Court Judge Carlton Reeves to issue a stay of his preliminary injunction order during the appeal. If granted, the state would have allowed the state to enforce the law during its appeal of the ruling against the law.

Bryant signed the bill, HB 1523, into law on April 5. The bill provided protections for individuals, religious organizations, and certain businesses who take actions due to their “sincerely held religious beliefs or moral convictions” to same-sex marriage — or any sex outside straight marriage. It also provided similar protections for those who object to transgender people.

These anti-lgbt "religious liberty" laws  seem to be facing the same problem as anti-marriage equality laws in that they may be popular but in a legal sense, they flop with a huge thud.


Posted by BlackTsunami at 4:05 PM No comments:

Editor's note - This election is playing havoc with my blog.  Not only is my traffic steadily increasing in Russia (which probably doesn't mean ANYTHING ), but with Trump throwing bombs everywhere, the purveyors of anti-lgbt propaganda are too busy ducking for cover. That, however, doesn't mean things aren't going on and I will do my best to bring you the lgbt news of the day as well as original material like always: 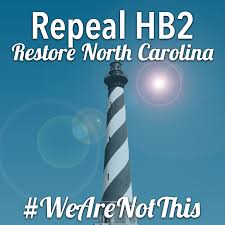 Federal judge to hear HB2 arguments in Winston-Salem - On the cusp of a major fight regarding HB2. It's about time.

Meet The First And Only Man To Ever Publicly Come Out In Nigeria - A reminder of how we should never take our fight for lgbt equality for granted. Would any of us have the courage to do this if in the same situation as Bisi Alimi?

Gordon Klingenschmitt: California Subjecting Kids To 'Pedophile Spirit Of Abuse' With LGBT History Curriculum - And your daily dose of crazy, like fungus coming out from between the rocks.
Posted by BlackTsunami at 8:50 AM No comments: