I am just FLOORED by Brian Brown's comments regarding his recent debate with gay activist Dan Savage.

Brown wrote a long-winded rambling piece which did nothing to recap the debate, but rather attempted to paint himself as David after he slew Goliath. Is this callous or what:

One thing is very clear to me after the time we spent together: Dan Savage believes that gay people are "a tiny defenseless minority," as he said during the debate.

He made this claim while defending the public tongue-lashing of Christian students that brought us together. He doesn't seem to realize that his position as a 47 year old adult—one with the power of fame, celebrity and access to not only the White House, but also MTV—requires a new mentality.

A grown man does not accept an invitation to speak to middle- and high-school students and proceed to insult their faith, and to call them names when they show their objection in the only polite way possible, by politely leaving.

Dan has apologized for the latter, but not the former. As I told him face to face: "To have a bunch of high school students and attack their religious beliefs is not appropriate, it doesn't show respect."

He appears unable to process this point of view.

He has become a hero to a lot of gay people not only for the good he's done (like telling gay kids their lives are precious—don't commit suicide!), but in some cases because Dan Savage is willing to insult and demean those with whom he disagrees.

I don't remember Savage demeaning Brown during the debate.

Needless to say Brown goes on like this - i.e.congratulating himself  and spotlighting the very few comments declaring him as the victor.

Naturally Brown omits the simple fact that the vast majority of comments on the youtube site of the debate points out that Savage basically handed him his ass.

And of course, Brown also omits the most telling moment of the debate when he totally undermined the argument for passing laws against marriage equality. You know the statement he made: 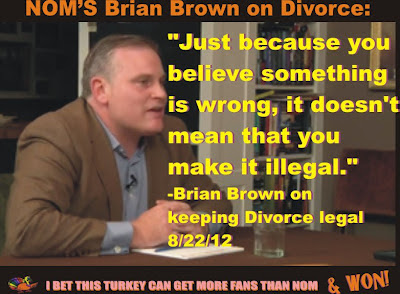 However, try as he might to come off as a winner, I think Brown knows that he laid a giant egg in the debate. Savage came to him with facts and when hit with these facts, Brown at times retreated to the standard talking points:


"We who believe in traditional marriage will be thought of as bigots."

"There is something special and unique about marriage as the joining of the two halves of humanity."

However, check out this passage from Brown's:

Let me pose a question to the Dan Savages of the world. Once gay people were a powerless and defenseless minority. Now, you have organized, protested, and become powerful through the use of democratic freedoms and intellectual debate, a powerful cultural force in our time. What use do you intend to make of your power?

The jury is out, as they say, on just how much power we as a community actually do have. But I am rather fond of what Brown said. Try as he might to pretend that he owns the high road, Brown sounds like he can't help but to respect us.

And it's not the respect that comes from us subjugating ourselves to him or those that believe as he does.

It's respect that from us taking him and others to task for their disrespect of us and our families.

So to answer your question Brian, I think that we intend to garner more of that respect.

It's about acquiring the things that belong to us. And these are the things that every human being deserves - respect and the freedom to live our lives by our standards and not by some one else's religious beliefs or  fevered imaginations of what we do in bed.

The religious right will go crazy over this one, but who cares what they think. Personal religious beliefs is no excuse for a secular business to discriminate.

A lesbian couple who sued a Vermont inn last year after they were turned away because of their sexual orientation won a settlement today.

The Wildflower Inn in Lyndonville acknowledged it had broken the law and agreed to pay $30,000 in fines and damages.

Kate Baker and Ming-Lein Linsley were outraged when they found out Linsley’s mother, who was organizing the reception for the New York couple’s destination wedding in Vermont, was turned away by the Wildflower Inn in Lyndonville.

Together with the Vermont Chapter of the American Civil Liberties Union, the couple filed suit against the inn last July. In October, the Vermont Human Rights Commission joined in the lawsuit. The commission is the state body responsible for enforcing human rights laws.

Today, the parties settled the dispute, closing an unpleasant chapter for both the inn and the couple. According to the settlement, the Wildflower Inn was acting in good faith and in compliance with a 2005 decision by the Vermont Human Rights Commission that said that while no public establishment may refuse to serve a customer based on sexual orientation, the inn could advise potential customers of the owners’ Catholic beliefs. Based on that decision, the Wildflower Inn’s stated policy was to ignore all calls and emails from same-sex couples hoping to host a wedding or reception at the inn. If confronted, their policy was to advise the couple that the owners did not believe in same-sex marriage, but would host the reception if they really wanted to.

. . .  Dan Barrett, an attorney for ACLU-Vermont, said the settlement asserted that the 2005 decision was no longer valid. “What this settlement makes clear is that you can’t discourage and get away with it. Discouragement or any unequal treatment of LGBT customers is [legally] the same as an outright refusal,” he said.

. . . The Wildflower Inn must now pay a civil penalty of $10,000 to the Vermont Human Rights Commission and establish a $20,000 charitable trust for the Linsleys. Some of the money will go towards the legal costs the couple incurred over the past year while the vast majority will go to charities of their choosing.

A 'Blacklist' is in the Eye of the Beholder - And a quick reminder of why the call against Besen is hypocritical.

Anti-gay Organizations Exploit and Fundraise in Wake of Attack - We shouldn't be surprised by this, but it helps to point it out.

Why FRC’s New “Religious Hostility” Report Is A Joke - Generally this is a joke because it comes from the Family Research Council, a group not known for being truthful. Equality Matters points out specific reasons.

Posted by BlackTsunami at 9:00 AM 2 comments:

According to Right-Wing Watch:

Related post - If Matt Barber hates gay sex so much, then why does he keep talking about it?

Posted by BlackTsunami at 5:03 AM 8 comments: