"Does the president have the right to force your daughters or granddaughters to share a public restroom with a man? . . .Do you think government officials should have the right to punish a school for not allowing a male student to wear a mini skirt, high heels, and a pink wig to class?" - Family Research Council president Tony Perkins in an fundraising email request. FRC and several other like-minded groups are targeting fears and ignorance about the transgender community in order to hinder lgbt equality.


According to Michelangelo Signorile, there is a serious backlash against lgbt equality by religious right groups in the wake of legalized marriage equality. He also said that lgbt groups are scrambling to catch up. As you can see by the two quotes-  decades apart but very similar - history seems to be repeating itself.  We gain a victory and those opposing lgbt equality exploit fear in order to take it way from us. Meanwhile, we either scramble or stand in the wake of the possibly coming hurricane with no way to fight its onslaught.

So here is the big question. What's more depressing?  That anti-gay groups and figures can successfully exploit the same fears about children and lgbts over 35 years apart?

Or that  even after dealing with the same modus operandi of anti-gay groups and figures over and over again, our community and leaders seem to still be behind the curve rather than riding it?

If you know how your enemy will lie in order to combat your success, you don't wait until he or she begin their lies. The fact that these so-called Christian groups and individuals exploit fear about children is a story in itself which begs to be told.

That is if we can get off our asses and demand the conversation to begin.
Posted by BlackTsunami at 1:50 PM 1 comment: 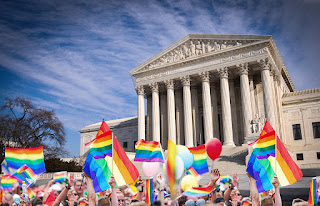 How a Ferocious Backlash to LGBT Equality Is in Full Force While Leaders Have No Strategy - Michelangelo Signorile's wonderful piece is a serious call to action that our community MUST heed. Perhaps the problem lies with the fact that we are not more aggressive in calling out the forces of homophobia. We tend to let them start the fight, begin the argument, and then we are left scrambling to catch up.

Why This Radical Leftist is Disillusioned by Leftist Culture - But our lgbt leaders aren't totally to blame. Part of the blame has to be given to the group who is the subject of this wonderful piece which resonated with me from the first paragraph. We can't fight the anti-gay right if we are only interested in pretentious bullshit such as academic words and terms like - “the patriarchy”, “white privilege," or “heteronormativity” - the vast majority of lgbts, the ones who need someone to fight for them, don't know what the hell we are talking about.

North Carolina Governor Wages A Preemptive Strike Against Transgender Equality - If the city of Charlotte passes an pro-lgbt nondiscrimination ordinance, NC's governor has promised to make an ass of himself by intervening in an ugly way.

Cruz Campaign Quietly Admits 'It Was A Mistake' To Attend Radical 'Kill-The-Gays' Conference - Really? Thanks for the sour persimmons, Ted.
Posted by BlackTsunami at 9:07 AM 2 comments:

Editor's note - I am posting later than I usually do this morning because I am also fighting a serious cold. Bear with me.

The death of SCOTUS justice Antonin Scalia has led to a lot of outpouring of wonderful accolades for the man. Certainly, Scalia deserves these accolades. But they don't tell the true story of Scalia's tenure on the Supreme Court. In all honest, he was not a popular or liked figure and for good reason. Jeffrey Toobin, The New Yorker staff writer and CNN legal senior analyst, can put it better than I:

Antonin Scalia, who died this month, after nearly three decades on the Supreme Court, devoted his professional life to making the United States a less fair, less tolerant, and less admirable democracy. Fortunately, he mostly failed. Belligerent with his colleagues, dismissive of his critics, nostalgic for a world where outsiders knew their place and stayed there, Scalia represents a perfect model for everything that President Obama should avoid in a successor.

. . .  His revulsion toward homosexuality, a touchstone of his world view, appeared straight out of his sheltered, nineteen-forties boyhood. When, in 2003, the Court ruled that gay people could no longer be thrown in prison for having consensual sex, Scalia dissented, and wrote, “Today’s opinion is the product of a Court, which is the product of a law-profession culture, that has largely signed on to the so-called homosexual agenda, by which I mean the agenda promoted by some homosexual activists directed at eliminating the moral opprobrium that has traditionally attached to homosexual conduct.” He went on, “Many Americans do not want persons who openly engage in homosexual conduct as partners in their business, as scoutmasters for their children, as teachers in their children’s schools, or as boarders in their home. They view this as protecting themselves and their families from a life style that they believe to be immoral and destructive.”


Check out Toobin's entire piece here in The New Yorker.