Drag queens will appear in a Super Bowl ad for the first time ever - And I am HERE for it.

Bowen Yang Opens Up About His Experience In ‘Gay Conversion’ Therapy - Wow! An SNL cast member gets real about that awful "therapy."

Darrell Issa slammed by fellow Republicans for running “gay-baiting” political attack ad - You know it's serious when other members of the GOP are bothered by it.

This Is How U.K. LGBTQ Rights Change After Brexit This Week - The struggle is real and worldwide.

Posted by BlackTsunami at 6:39 PM No comments:

Dear conservative evangelicals leaders, when Trump goes down, you need to go with him (and here are just a few of the receipts to pay your ticket) 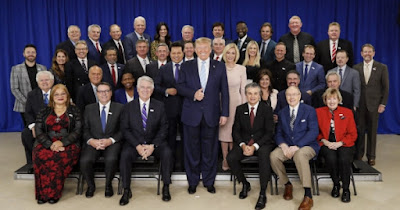 As we watch Trump's impeachment trial with all of its twists and turns, one thing is clear. Even if he does get away with what he has done, there is enough proof to show that Trump has tarnished himself the presidency, the GOP and especially folks who claim to have a mindset which should have elevated them to know better.

I'm talking about Franklin Graham, Robert Jeffress, Jerry Falwell, Jr. and the rest of the evangelical right/anti-LGBTQ industry who freely and wantonly sacrificed all of the values they claimed to uphold for a little political power. They got a president who gave them access to policy, gave them some judges and laws which attacked the LGBTQ community and women's health while giving their religious beliefs an unfair advantage and an elevated status.

And no one should forget their real faces - that of hypocritical, self-righteous, power-hungry bloodsuckers who would find a Biblical verse to defend the devil if it meant more power and more access to White House policy.

To hopefully make sure that people don't, I've been saving a few receipts to serve as reminders of how low conservative evangelical leaders stooped. To their supporters, these receipts don't mean anything. But to the rest of America, especially those who aren't aware of them, don't exactly care for them, and will be here after we are all gone, they are a perfect representation of  the true face of America's evangelical right.

Here are just demonstrating how they drolled and fawned over Trump while in full knowledge of his incompetence and corruption.

Read more »
Posted by BlackTsunami at 5:15 PM No comments: