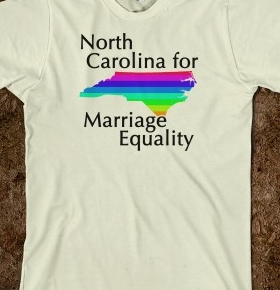 According to Think Progress, those pushing that awful anti-marriage equality amendment in North Carolina have wasted no time in pushing lies in order to scare up votes:


Conservatives supporting North Carolina’s proposed constitutional amendment banning recognition of all same-sex relationships have launched a new website called Vote For Marriage NC. The site describes same-sex marriage as a “threat” and  a “new legal orthodoxy” that would “redefine” marriage as “genderless” for all couples, and those who do not agree “will be treated under the law just like racists and bigots, and will be punished for their beliefs.” Unsurprisingly, none of the claims made stand up to scrutiny.

My fellow blogger, Zack Ford who work at Think Progress, breaks it down  He does such an excellent job that it needs to be passed around to as many North Carolinians as possible:


CLAIM - “Religious groups who have refused to make their facilities available for same-sex couples have lost their state tax exemption.”
REALITY - The only example conservatives ever cite is a New Jersey Methodist pavilion, and that pavilion did not actually have a religious exemption.
CLAIM - “Religious groups like Catholic Charities in Boston and Washington DC have had to choose between fulfilling their social mission based on their religious beliefs, or acquiescing to this new definition of marriage.”


REALITY -  Catholic Charities have never been obligated to shut down their services, but have done so voluntarily when they are no longer subsidized by the state because they discriminate.
CLAIM -  “Nonprofit groups are faced with abandoning their historic mission principles in order to maintain governmental contracts (for things like low-income housing, health clinics, etc.).”
REALITY -  Again, no group has been forced to close, though some may lose state funding. In one case, the Maine Catholic Diocese shuttered a homeless support agency as punishment for supporting marriage equality.

Posted by BlackTsunami at 3:09 PM 2 comments:

'Glitter-bombing is counterproductive nonsense' and other Tuesday midday news briefs

Dan savaged by glitter before Vancouver talk - Dan Savage got glitter-bombed again, this time in Vancouver. For whatever reason this time confuses me. You just have to read the article.

But allow me to give a little editorial comment on this practice of glitter-bombing.

I don't care who is the victim of it, the practice of glitter-bombing is a cheap, unfocused psychological stunt. It's a petty rush for an attention addict who has deceive him or herself into thinking that they are doing something substantial for the community rather than providing fodder for the opposition on how the lgbtq community is supposedly pushy and will resort to pettiness if it doesn't get it's way.

Glitter-bombing isn't merely stupid; it's the sad sign of a people who are showing themselves not ready for their roles in the important struggle for equality. You see with that role comes structure and planning for acquiring and securing equal rights. With that role comes patience and the knowledge that you are not doing things merely for yourself and what you want at the present, but also how your actions will improve the lives of those who will come up after you.

And let's face it. Throwing colorful bits of confetti at people who offend you is not a suitable substitute for structure and planning.

Also what's with this desperate need for publicity anyway? The opposition gets publicity, but in all honesty, it doesn't need it. You see they are carefully plotting and planning behind the scenes and away from the cameras to achieve their goals.

Now imagine what we could do if we employed that type of discipline for a change.

And in other news (if I haven't sufficiently gotten you angry):

Ironically, it's NOM that's hiding gender here - Jeremy Hooper (the Arn Anderson to my Tully Blanchard) catches the National Organization for Marriage in ANOTHER deception.

Romney’s Foundation Donated To Anti-Gay Marriage Group - Surprising no one with a pulse.

Editor's note - Today is a first on my blog. I usually write one post in the morning but two things happened which deserves comment. After finishing this piece about how One News Now distorted a controversy to insult gay parenting, pan down to the second post and read about the American Family Association admitting that its boycott against Home Depot has NOT been successful.


If you want a good reason why the American Family Association's phony news source, One News Now, is a detriment to truth rather than an asset, then take a look at the following piece entitled School: Let him who 'screams loudest' get his way.

The piece is about how a column in a Wisconsin school newspaper about the gay community raised a huge controversy.

However, take a look at how One News Now phrases what happened as opposed to how the Green Bay Press Gazette tells the story:

Officials of a Wisconsin school have censored a student's editorial column printed in the city paper and "sincerely" apologized for his words in support of natural mother-father adoptions.

Both sides of the adoption issue were presented in separate articles, each written by students. But Shawano High School officials pulled the article written by a 15-year-old student who used scripture to support his argument. He wrote: "If one is a practicing Christian, Jesus states in the Bible that homosexuality is [a] detestable act and sin, which makes adopting wrong for homosexuals because you would be raising the child in a sin-filled environment."

The superintendent apologized, calling the editorial a form of bullying. But Steve Crampton of the Liberty Counsel thinks the school's action is reprehensible.

A gay couple with school-age children is outraged over a Shawano High School newspaper column that cites Bible passages and calls homosexuality a sin punishable by death.

The column ran on the editorial page of Shawano High School's Hawks Post recently as part of an opinion package about gay families who adopt children. The other side said sexual orientation does not determine a person's ability to raise kids.

"This is why kids commit suicide," said Nick Uttecht, who is raising four children with his partner, Michael McNelly.

Read more »
Posted by BlackTsunami at 5:06 AM 6 comments:

Last week, the American Family Association claimed that its boycott against Home Depot was successful.

AFA was boycotting the company because Home Depot has been very supportive of the lgbtq community, even publicly supporting pride events and providing booths for children during those events.

AFA spokesman, Randy Sharp says “We’re seeing some movement. It appears that the Home Depot is pulling back from their support of homosexual activism. Over the course of the last three years, we’ve seen a reduction in the number of gay pride events that they’re sponsoring and participating in. However, we want to be cautious.”

However, Samantha F. DeVaney, a representative of Home Depot, said that this was not true:

We have never changed our commitment to diversity and inclusion of all people, and we have no intention of doing so. Nor have we changed our apron policy or the guidelines for our Foundation?s charitable giving.

So today, AFA is now admitting that it was wrong about its Home Depot boycott:


American Family Association, which heads up a boycott against Home Depot, reported earlier this month that the national retailer appeared to be pulling back its support of homosexual activists, noting the home improvement chain participated in just four "gay pride" events in 2011 -- down from at least 16 such events in 2009 and 2010. Furthermore, AFA reported that Home Depot ordered its employees to stop wearing their orange aprons to homosexual-themed events.

But AFA's director of special projects, Randy Sharp, now says his organization spoke too soon. "Once we brought that to light, Home Depot made a public statement to everyone who contacted them and said [essentially] 'No, we haven't changed any policies. When it comes to homosexuality, homosexual marriage in our culture, we will continue to support it financially.